IRS Commissioner Presents His Case Against Impeachment to House Republicans 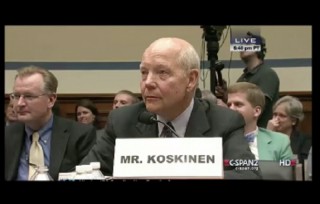 IRS Commissioner John Koskinen has been the subject of an investigation by Congress over his role in the agency’s targeting of conservative groups, and an alleged cover-up. In May and June, there was a House Judiciary Committee hearing to explore whether there were grounds to impeach Koskinen, who allegedly ignored a Congressional subpoena and made false statements under oath. In June, the House Oversight and Government Reform Committee approved a resolution calling for Koskinen’s resignation or removal from office. On Wednesday, Koskinen held meetings with GOP members of Congress to discuss why impeachment would be inappropriate, according to a report by Politico.

House Republicans have argued that Koskinen did not properly address Congress’s request for documents related to the IRS’s actions towards particular organizations seeking non-profit status. Related emails were said to have been lost when the hard drive of Directer Lois Lerner crashed in 2011, yet Koskinen told Congress that all documents would be turned over, when he allegedly knew thousands were already missing.

Koskinen held meetings with the GOP’s moderate Tuesday Group and the Republican Study Committee, pleading his case.  “If somebody has a meeting and they’d like to hear from the IRS commissioner – I haven’t turned anybody down,” Koskinen reportedly said. However, he did turn down an invitation to testify about the allegations against him at a House Judiciary Committee hearing. At the time, Koskinen said that he had recently returned from a trip overseas and couldn’t fit it in his schedule.
North Carolina Representative Mark Meadows criticized Koskinen for only arguing his side in Wednesday’s meetings. “It’s up to him to make the case, but normally you do that under sworn testimony, not in a casual setting like this,” Meadows told Politico.

Nevertheless, Koskinen appeared to win some people over, or at least have them seriously consider the matter. He pointed out that the actual targeting of conservative organizations took place before he took office, and refuted allegations that he ordered people within the agency to destroy evidence.In addition to arguing the facts, Koskinen reportedly told Republicans that the proper procedure for impeachment has not been followed.

“I think there are a number of members who are concerned about due process with respect to impeachment,” Pennsylvania’s Charlie Dent told Politico. “There is a way to do this,” he said, saying that due process is a serious issue.

Bill Flores, Chairman of the Republican Study Committee, agreed. “He did raise some interesting issues, and one of those is that there is a process — due process — that you go through with respect to impeachment, and I think he makes some valid points on that, so I need to think about this.”

The House GOP conference is set to discuss the matter next week. If Koskinen is impeached, it will be the first impeachment of an administration official of his ranking since Secretary of War William Belknap in 1876.