‘I Want to Beat the Sh*t Out of Her’: 86-Year-Old Woman Reams Out Purse Thief 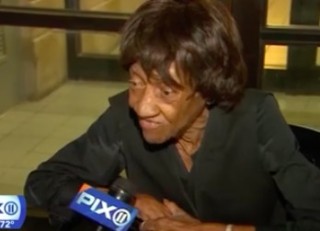 Ms. Bernice Starnes has a thing or two to say about the woman who allegedly robbed her outside her Bronx, New York apartment building. And she doesn’t mince word.

“She wants to hurt me, and the b*tch don’t even know me,” Starnes told PIX11 News.

You must watch the full interview here:

Police say the suspected thief, Adrianne Terry, swiped the old woman’s purse right as she was sitting outside of her apartment in her wheelchair. The suspect ran off, but the entire incident was caught on surveillance video. The suspect was arrested on Thursday.

“I couldn’t catch her. I wanted to catch her and beat the sh*t out of her,” Starnes said.  Terry has been charged with grand and petit larceny.

When reporters asked Terry about the incident, she denied any involvement. But, Starnes is not buying it. She wants Terry put away.

“I hope that they beat her ass. Some of the women in prison beat her ass everyday for as long as she’s there,” Starnes told the PIX11 reporter, “I’m supposed to feel sorry for that b*itch. I don’t.”

You gotta love this lady’s spunk.