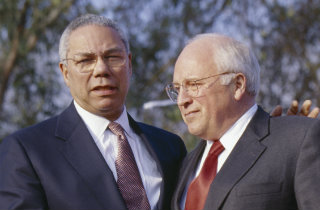 LawNewz has obtained a few most interesting emails from the archives of Colin Powell’s Gmail account, which were leaked en masse on Tuesday night. What stands out is that they relate to his experiences attending the secretive, shadowy Bohemian Grove encampment this past July. Bohemian Grove was described  in a 2011 Washington Post article by Elizabeth Flock as a gathering of “some of the richest and most powerful men in the world gather at a 2,700 acre campground in Monte Rio, Calif., for two weeks of heavy drinking, super-secret talks, druid worship, […] and other rituals.” Only one of these rituals, shot by conspiracy theorist Alex Jones, exists on video.

The theoretical end game of the retreat is “to escape the ‘frontier culture,’ or uncivilized interests, of common men.” Members and guests reportedly include former Vice President Dick Cheney, Walter Cronkite, Clint Eastwood, and most Republican presidents since Dwight Eisenhower. So it’s no surprise that Powell is on their list of elites, but what is surprising is how willing he is to dish on the meetings.

This email, sent from Powell to former Canadian Attorney General Peter MacKay on July 24th, shows Powell talking about how the Bohemian Grove attendees in general are planning to vote in the upcoming presidential election (screenshots at the bottom of this post):

Peter, I am back from the Bohemian Grove. Surprise, surprise, I sat next to Stephen Harper a couple of times and had a nice discussion. Grove attendees know that Trump is a disaster. Most will vote against, but quite a few will not vote for Hillary and will vote for a third party candidate. Strange doings down here. Otherwise all is well with the Powells. We’ll sneak away for a few days in August. Of course I’d love to see you. Let me know your dates. I told Stephen that you seemed quite content in your new place in life.

All the best, Colin

On July 26th, Powell told his chief of staff at the Colin Powell School for Civic and Global Leadership about meeting billionaire Charles B. Johnson (who had just gifted the school a a stock grant) at the retreat, Johnson was apparently the only one of the 2,000 attendees to wear the iconic red Trump campaign hat:

🙂  Charlie and I chatted at Bohemian Grove. Great guy. Unfortunately, he was the only guy among 2000 guys to wear a Trump red hat. We did not exchange views on politics.  🙂   I am expecting another contribution shortly and maybe more. cp

Another email, this one addressing the feelings that the campers from the financial sector have on Donald Trump, was sent from Powell to former New Jersey Governor Christine Todd Whitman on July 27th:

I was at Bohemian Grove over the weekend.  Lots of guys in that same position. Few vocal Trumpers.  NYC finance guys hate him, wouldn’t lend him money. He cheats and then sues. 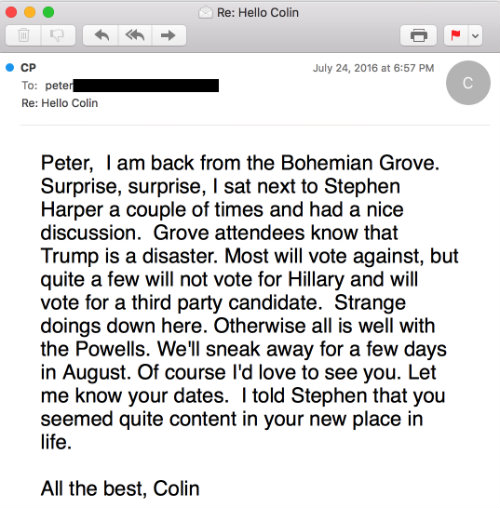 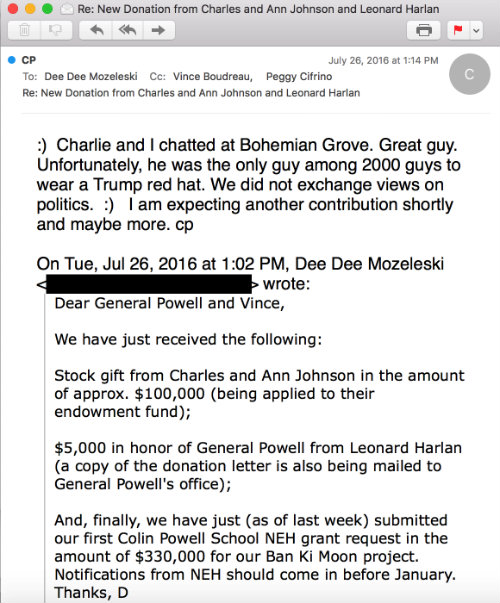 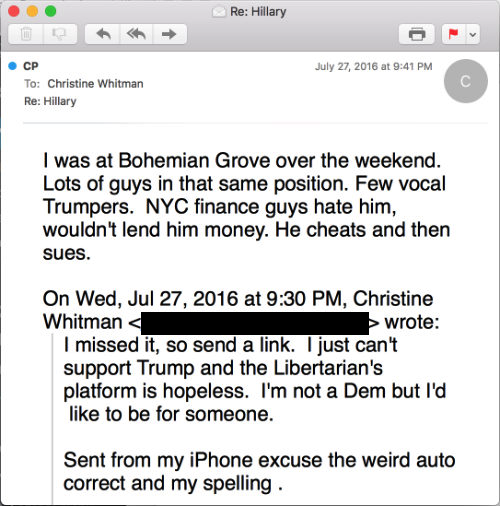