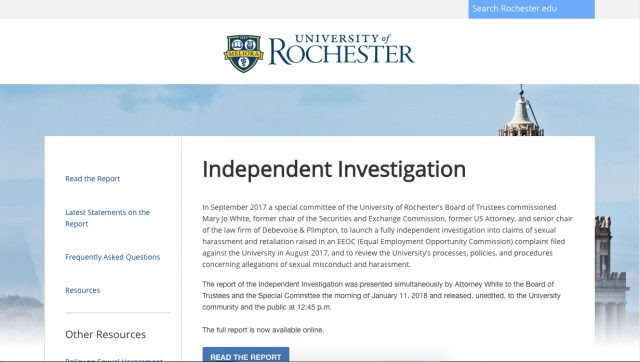 A report issued by one of the world’s most prestigious law firms accidentally revealed the names of several sexual harassment victims and witnesses at the University of Rochester.

Prepared by a team of Debevoise & Plimpton lawyers led by former U.S. Attorney and former Securities and Exchange Commission Chair Mary Jo White, the report inadvertently disclosed the names of confidential witnesses in a long-running investigation into sexual misconduct allegations against a professor and the university’s allegedly poor response to those allegations.

The White-Debevoise report was commissioned by the University of Rochester Board of Trustees in the fall of 2017. White’s team of well-paid, white shoe attorneys promised witnesses that their names would be protected if they opted into providing information for the $4.5 million investigation.

When White and her big law investigators initially released their report on January 11, however, those promises were swiftly and surely broken.

According to a report by the University of Rochester’s Campus Times, “several documents contained witnesses’ real names.” When contacted by the Campus Times, White and other attorneys at Debevoise & Plimpton refused to comment on their mistake.

Later, in emails obtained by the Campus Times, White conceded the data breach had occurred, that the names were revealed in “error” and that her team of attorneys went back to redact the names–the identifyig files were updated roughly an hour after they were originally made available for public consumption.

But an hour on the internet ain’t as short as it used to be.

That sole hour was time enough for Kris Gorman to learn–thirdhand, from a friend–that she had been exposed; and that her exposure came by way of an unforced error made by the same prestigious attorneys who had promised her information would be kept secret and safe.

In comments to the Campus Times, Gorman said:

I’m outraged. Redacting names is a basic skill for attorneys, and I would have hoped for more care to be taken towards victims given the genuine concern about professional retaliation expressed to Debevoise by some of these same women and because the report was going to be released publicly.

Gorman continued, “I think this reflects poorly on the sensitivity with which this investigation approached victims and is consistent with other comments I’ve heard from witnesses who told Debevoise not to release specific identifying details only to find those details in the report.”

The inadvertent doxxing of sexual harassment victims and witnesses is the latest criticism-cum-controversy in a long line of criticisms and controversies directed at and dealing with the White-Debevoise report.

To start, there are the underlying claims.  In response to a complaint filed by the Equal Employment Opportunity Commission in August 2017, the White-Debevoiuse report was commissioned in September 2017 to investigate claims that Professor T. Florian Jaeger engaged in improper and forced sexual relationships with no less than 14 students–including allegations of illicit drug use at the professor’s own Adirondacks getaway pad.

The University of Rochester’s initial response to those allegations was apparently so bad that a worldwide group of professors pledged a boycott of the institution.

The hefty price tag of $4.5 million was yet another complaint. Later, once the report was released, many accused the report and its investigators of reaching dubious and even “corrupt” conclusions–the report completely exonerates the University of Rochester and Professor Jaeger of all wrongdoing for their actions. At least one professor resigned in protest after the allegedly soft-peddled report was released.

Additionally, before the report was released, while still stressing his own innocence and capability in the handling of the Jaeger matter, University of Rochester President Joel Seligman announced his resignation, effective February 28.