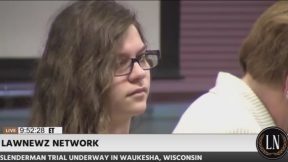 WAUKESHA, Wis. (AP) — A Wisconsin girl accused of helping her friend stab their classmate nearly to death to please online horror character Slender Man was lonely, depressed and descended into “madness,” her attorney said Friday as she pleaded with a jury to send the girl to a mental hospital rather than prison.

Anissa Weier and Morgan Geyser lured classmate Payton Leutner into the woods at a park in Waukesha, a Milwaukee suburb, in 2014. Geyser stabbed Leutner 19 times while Weier urged her on, according to investigators. A passing bicyclist found Leutner, who barely survived her wounds. All three girls were 12 at the time.

Both Weier and Geyser told detectives they felt they had to kill Leutner to become Slender Man’s “proxies,” or servants, and protect their families from the demon’s wrath.

Weier, now 15, pleaded guilty to attempted second-degree intentional homicide in a deal with prosecutors in August. But she claims she was mentally ill during the attack and not responsible for her actions. A jury heard three days of testimony from psychologists and detectives. If the jury agrees she wasn’t responsible, she’ll be committed to a mental institution. If not, she faces prison.

The jury began deliberations Friday morning. Weier’s attorney, Maura McMahon, said during closing arguments that Weier was lonely and depressed after her parents divorced and that she latched onto Geyser.

Together they became obsessed with Slender Man, developing a condition called shared delusional disorder, McMahon said. Weier believed Slender Man could read her mind as well as teleport and would kill her or her family if she talked about him, she said.

“This sounds crazy, because it is,” McMahon said. “This was a real being to this child and she needed to protect those around her. At 12 years old, she had no way to protect herself from (Slender Man) except for Morgan’s advice and they swirled down into madness together.”

Waukesha County Deputy District Attorney Ted Szczupakiewicz countered during his closings that the stabbing was calculated. He said the girls had planned the attack for at least four months. He asked jurors to consider why if the girls were so afraid of Slender Man they waited so long to attack Leutner.

He also pointed out that Weier told a detective she wasn’t frightened of Slender Man until after the attack, when Geyser told her she had made a deal with the monster that he would spare their families if they killed Leutner.

“It comes down to did she have to or did she want to?” Szczupakiewicz said. “It wasn’t kill or be killed. It was a choice and she needs to be held criminally responsible.”

Weier, bespectacled and dressed in a long gray-and-white cardigan, visibly trembled in her seat during the closings.

Geyser has pleaded not guilty to one count of attempted first-degree intentional homicide by reason of mental disease or defect. Her trial is set to begin Oct. 9.