Why Trump’s DACA Deal Will Lead to His Impeachment 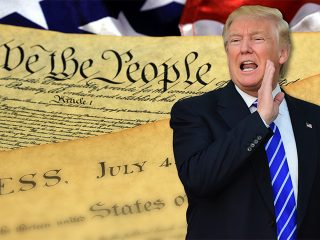 Prior to this week, if you’d ask any credible legal scholar (even those like Larry Tribe who says there is plenty of justification to impeach Trump), they would tell you it won’t happen because of the current make-up of Congress. Well, that all changed Wednesday night. In the eyes of conservatives, President Donald Trump made a deal with the devils (Chuck Schumer and Nancy Pelosi), and it could very well be his undoing.

You see, there is plenty of “evidence” that could be used to impeach Trump. As Special Counsel Robert Mueller‘s probe intensifies, the drip, drip of incriminating information continues to leak. While it is probably correct to conclude there isn’t enough yet known to charge Trump with a crime, the parameters for impeaching a President are much more squishy. Section 4 of Article Two of the United States Constitution simply says Congress can impeach the President for “Treason, Bribery, or other high Crimes and Misdemeanors.” What are “other high crimes and misdemeanors”? Well, here’s the problem: Congress ultimately gets to decide. That doesn’t bode well for Trump because the very Republicans that would have never voted him out of office are turning fast.

Despite Trump’s attempt at an early morning backpedal, they are fuming. Rep. Steve King (R-IA), a hardline immigration hawk, said his base will leave him if the “amnesty” deal is passed. Hours after Democrats announced the deal Wednesday night, Fox News and longtime Trump supporter Sean Hannity took to twitter to lambast the deal saying that it would be “political suicide.”

Former Trump advisor Steve Bannon‘s website, Breitbart, is also up in arms stating that Trump is “caving” on immigration calling him “Amnesty Don.” “MAGA” Twitter (aka supporters of Trump on Twitter) are livid, one asking, “At this point, who doesn’t want Trump impeached?”

Trump’s got a problem. As it stands currently, there are legitimate legal arguments to impeach him. Many scholars including Fordman Law Professor Jed Shugerman, have argued that the standard for impeachment—high crimes and misdemeanors—is not quite as high as people tend to believe.

“There’s a misconception that a high crime and misdemeanor must be a crime in the traditional sense,” Shugerman said.

For example, misappropriating government funds, appointing unfit subordinates, and losing a ship by neglect have been grounds for impeachment in English history. In the United States, “high crimes and misdemeanors” has been applied to cases such as using the office for financial gain and filing false income tax returns.

So what’s the evidence? We’ve posted over and over again, about the possible scenarios. For one, Mueller is apparently drilling into Trump’s role in drafting Don Jr.’s false statement on the purpose of the Russia meeting. Some legal experts have this could be evidence of obstruction of justice because Trump knew their was an ongoing investigation. Mueller is also reportedly homing in on former FBI Director James Comey‘s sudden and abrupt firing, and the subsequent fallout which could amount to obstruction as well. Democrats, and others have also raised concerns about Trump’s mental state as evidenced by a series of questionable decisions before and after he’s assumed office.

Bottom line: Trump better watch his back. Republicans had turned on President Richard Nixon in the GOP cloakroom of the House months before most of them said anything publicly. It eventually came public in a torrent. Trump’s demise appears not far behind.