Who Are the Possible Trump Supreme Court Nominees? We Break It Down 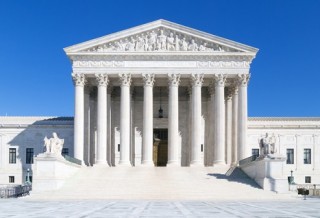 Now that Donald Trump won the general election, it’s worth taking a look at who he might nominate to the Supreme Court to take the place of the late Antonin Scalia (hint: it won’t be current nominee Merrrick Garland). In addition to filling Scalia’s seat, Trump could end up choosing more justices, as Ruth Bader Ginsburg is 83, Anthony Kennedy is 80, and Stephen Breyer is 78. Ginsburg and Breyer are among the remaining liberals on the Court, while Kennedy is a moderate, so should they vacate their spots, we could see a very different Supreme Court if they are replaced with conservative justices.

Earlier this year, Trump released a list of names of possible justices. LawNewz.com put together some background on each of the potentials. As to be expected, they all have conservative credentials.

Pryor is a federal judge in the United States Court of Appeals for the Eleventh Circuit. He was nominated by President George W. Bush in 2003. His nomination was filibustered so in 2004, President Bush installed the former Alabama Attorney General on the court during a congressional recess appointment. Democrats scrutinized Pryor for some of his conservative positions, including on Roe v. Wade. Pryor previously said, according to confirmation hearing testimony, that Roe was “the worst abomination in constitutional law in history.”  After a higher court ruling on a Alabama execution case, he allegedly ridiculed the Supreme Court by saying “This issue should not be decided by nine octogenarian lawyers who happen to sit on the Supreme Court.” Most recently, Pryor was nominated by President Obama to sit on the United States Sentencing Commission.

Who is David Stras?

Who is Joan Larsen?

Who is Raymond Kethledge?

Who is Don Willett?

Justice Don Willett has served on the Supreme Court of Texas since 2005, when appointed by Republican Gov. Rick Perry. Before that, he was a Deputy Texas Attorney General under then-Attorney General (now Gov.) Greg Abbott. His career has taken him to stints at the U.S. Department of Justice, and George W. Bush’s 2000 presidential campaign. He got his J.D. from Duke University. Seems like a qualified guy, but he has tweeted a lot of jokes at Trump’s expense.

Who is Thomas Lee?

Thomas R. Lee was appointed to the Utah Supreme Court in July 2010.  Lee graduated, with high honors, from the University of Chicago Law School. He served as a law clerk for Judge J. Harvie Wilkinson, III, of the United States Court of Appeals for the Fourth Circuit and for Justice Clarence Thomas of the United States Supreme Court.  Prior to his appointment, Lee taught as a professor a Brigham Young University J. Reuben Clark Law School and maintained a part-time private practice with a law firm that focused on intellectual property law.

Lee also spent time as a Deputy Assistant Attorney General in the Civil Division of the U.S. Department of Justice.

Who is Steven Colloton?

Colloton currently serves on the Eighth Circuit Court of appeals. He is a graduate of Yale Law School and a former clerk for former Supreme Court Chief Justice William Rehnquist. Prior to joining the Eighth Circuit Court, he was U.S. Attorney for the Southern District of Iowa. He was also an Assistant U.S. Attorney in the Northern District of Iowa from 1990 to 1991, and an associate independent counsel in the Office of Independent Counse Kenneth Starr in 1995 and 1996.

Who is Allison Eid?

Eid is a Justice on the Colorado State Supreme Court. She is a former Solicitor General for that state, and was a professor at the University of Colorado School of Law, where she taught Constitutional Law, Legislation, and Torts. She is a graduate of University of Chicago Law School and a former clerk for Justice Clarence Thomas.

Who is Raymond Gruender?

Gruender is a judge on the Eight Circuit Court of Appeals. Prior to taking that role, he was U.S. Attorney for the Eastern District of Missouri. He spent nine years in private practice at Lewis, Ric and Fingersh, as well as Thompson Coburn. He earned his MBA and law degree from Washington University in St. Louis.

Who is Thomas Hardiman?

Hardiman currently serves on the Third Circuit Court of Appeals. He was previously a judge for the U.S. District Court for the Western District of Pennsylvania. Before becoming a judge, he worked in private practice at the law firms Skadden, Arps, Slate, Meagher, and Flom; Titus & McConomy; and Reed Smith. He is a graduate of the Georgetown University Law Center.

Who is Keith Blackwell?

Blackwell has been serving on the Georgia Supreme Court since 2012. Prior to that, he was on the state’s Court of Appeals, where he began in 2010. He graduated from the School of Law at the University of Georgia, where he was Senior Editor of the Georgia Law Review, before going on to clerk for the Eleventh Circuit Court of Appeals. He was an associate at the law firm Alston & Bird, and was a partner at Parker, Hudson, Rainer & Dobbs. Blackwell also worked as an Assistant District Attorney in Cobb County, Georgia.

Who is Charles Canady?

Canady currently serves on the Florida Supreme Court, where he has been since 2008. A graduate of Yale Law School, he began his career in the private sector at the firm of Holland and Knight, and later Lane, Trohn. Canady went on to serve four terms in the U.S. House of Representatives, where he was on the House Judiciary Committee. He was then General Counsel to Florida Gov. Jeb Bush, before Bush appointed him to the state’s court of appeals before moving on to the Supreme Court.

Who is Neil Gorsuch?

Who is Mike Lee?

Lee, a Republican Senator from Utah, was previously a clerk for the U.S. District Court in Utah and the Third Circuit Court of Appeals, where he worked for current Supreme Court Justice Samuel Alito. He also worked for the firm Sidley Austin, as well as Howrey LLP, and was an Assistant U.S. Attorney in Utah. A spokesperson for Lee told Politico in September that he is not interested in serving on the Supreme Court.

Who is Edward Mansfield?

Mansfield has been a justice on the Supreme Court of Iowa since 2011. Before that, he was on the Iowa Court of Appeals. He is a graduate of Yale Law School and a former clerk with the U.S. Court of Appeals for the Fifth Circuit. He worked in the private sector from 1983 to 2009, and has also been teaching as an adjunct law professor at Drake University since 1997.

Who is Federico Moreno?

Moreno is a federal judge for the U.S. District Court in the Southern District of Florida, where he has served since 1990. He previously served on the Dade County Court and the state’s Eleventh Judicial Circuit Court. Prior to that, he worked in the private sector, and was a federal public defender. Moreno graduated from the University of Miami School of Law.

Who is Margaret A. Ryan?

Appointed by President George W. Bush, Ryan is a judge for the United States Court of Appeals for the Armed Forces (CAAF). She attended Knox College and received her JD from the University of Notre Dame Law School. She served on active duty in the U.S Marines fro 11 years. She clerked for U.S. Supreme Court Justice Clarence Thomas.

Who is Amul Thapar?

Appointed by President George W. Bush, Thapar is a federal court judge in the eastern district of Kentucky. He also serves as assistant U.S. Attorney in Southerm District of Ohio and was U.S. Attorney in the Eastern District in Kentucky. He is the first federal judge of South Asian Descent. He most famously put an 84-year-old nun, who was an anti-nuclear activist, in prison for busting into a TN nuclear facility.

Also appointed by President Georgia W. Bush, Tymkovich serves as Chief Judge of the United States Court of Appeals for the Tenth Circuit. In a case before the Ninth Circuit, Judge Tymkovich wrote the for the majority, finding that for-corporations like Hobby Lobby are exempt from a law its owners religiously object to if there is a less restrictive way to promote the law’s interest. Burrell v. Hobby Lobby Stores was upheld by the U.S Supreme Court in 2014. Before he was appointed the bench, as Solicitor General in Colorado, he (unsuccessfully) argued the case Romer v. Evans. The U.S. Supreme Court ultimately ruled that a state constitutional amendment in Colorado preventing protected status based upon homosexuality violated the 14th Amendment.

Who is Robert Young?

Young is a Supreme Court Justice on the Michigan Supreme Court. He attended Harvard and Harvard Law School. Young wrote a MI Supreme Court advisory opinion that a photo identification requirement for voting was a “reasonable nondiscriminatory” requirement that has a “legitimate goal of preserving the fairness of the elections.”

There was also a report that Trump was considering PayPal founder Peter Thiel, but his campaign denied it.

This article has been updated to fill out more information about the possible nominees, and reflect Donald Trump winning the presidency.