Protests, Fires Sparked Across Country in Wake of Trump Victory 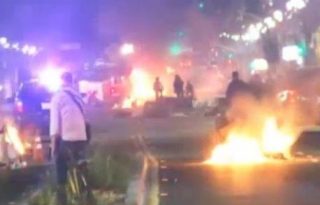 In the wake of Donald Trump’s victory in the Presidential election, protests sparked across the country early Wednesday morning. In California’s Bay Area, people marched in the streets setting fires and yelling, “Not our President,” KNTV reported. The Oakland Tribune’s offices were damaged, newsstands were set ablaze, and protesters burned Trump in effigy

Students at UC-Berkeley, UCLA, UC-Irvine, San Jose State, and San Francisco State also gathered in protest. Crowds chanted, “The people united will never be divided,” as they took to the streets.

Over in Pennsylvania, one of the more closely contested battleground states, students at the University of Pittsburgh took to the streets as well, according to the AP. Their campus newspaper is reportedly advertising a gathering on Wednesday billed as “Emergency Meeting: Let’s Unite to Stop President Trump.”