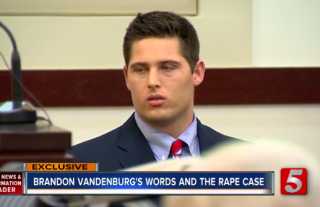 The retrial for the former Vanderbilt University football Brandon Vandenburg enters day 4. Vandenburg is charged with five counts of aggravated rape, two counts of aggravated sexual battery and unlawful photography.  While he did not physically participate in the 2013 alleged rape of an unconscious woman, prosecutors believe he encouraged it, and should be held responsible for what happened in the dorm room.

On Wednesday, the jury viewed video of the alleged sexual assault. A detective described the contents of the footage, saying that laughter could be heard while Vandenburg recorded other men allegedly sexually assaulting the woman. The detective pointed to Vandenburg as the one recording the video, because of the clothes he was wearing.

Jury selection took place in Memphis, Tennessee because the judge was concerned the intense media coverage could taint the jury. Jurors were bused to Nashville for the trial. Vandenburg was found guilty last year but a judge declared a mistrial after it was discovered a juror revealed he had lied about being a victim of an assault.

To Watch the Trial Live Click Here via News Channel 5

Stay with LawNewz.com for legal analysis on this case, and all the latest developments.