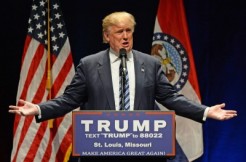 On Thursday, Donald Trump is testifying in his lawsuit against a chef who pulled out of a deal because of The Donald’s smack talk about Mexican immigrants. Trump’s lawyers tried and failed to keep him from having to testify.

To be specific, “Trump Old Post Office LLC” is suing “CZ-National” because of a famous chef, Geoffrey Zakarian. They’d been in talks to open a restaurant at the Trump International Hotel in Washington D.C. but Zakarian pulled out after Trump announced his presidential candidacy in June, 2015. Setting a tone for the rest of his campaign, The Donald called Mexican immigrants “rapists.” Apparently, the chef didn’t like that.

According to The National Law Journal, Judge Brian Holeman ruled that Trump’s testimony was needed because he had “personal knowledge of events and information relevant and material to the claims.”

In the lawsuit filed in August, Trump’s lawyers say Zakarian broke his contract. But a countersuit filed in September claims the opposite.

“Mr. Trump’s comments would inevitably affect the customer base as well, given that high-income customers — immigrants and non-immigrants, Hispanics and non-Hispanics — were refusing to patronize establishments associated with Mr. Trump,” stated the countersuit, obtained by The Washington Business Journal. “Accordingly, landlord has materially impaired tenant’s right to receive the fruits of the sublease.”
–