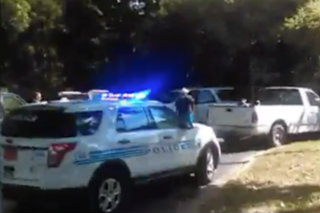 On Friday afternoon, after much speculation about if there was any unofficial video of the fatal police shooting of Keith Lamont Scott in Charlotte, North Carolina,  the Scott family’s lawyers provided The New York Times with the video recorded by Scott’s wife:

The Charlotte police have refused to release the official video of the shooting out of fear that it could impede their investigation.

In the video, Rdkeyia Scott, Keith’s wife, can repeatedly be heard saying “Don’t shoot him!” while trying to explain to the police that her husband has a “TBI” (traumatic brain injury, or concussion) and tell them that he needs to get out of his truck. She also makes a reference to her husband having just taken his medicine. The actual shooting was not caught on-camera and it’s still unclear if Scott had a gun.

Here’s the full transcript provided by the Times:

RAKEYIA SCOTT: He didn’t do anything.

RAKEYIA SCOTT: He doesn’t have a gun. He has a T.B.I. (Traumatic Brain Injury).

RAKEYIA SCOTT: He is not going to do anything to you guys.

OFFICER: Drop the gun. Let me get a fucking baton over here. [muffled]

RAKEYIA SCOTT: Keith, don’t let them break the windows. Come on out the car.

RAKEYIA SCOTT: Keith! Don’t you do it.

OFFICER: Is everybody good? Are you good?

RAKEYIA SCOTT: He good. Nobody … touch nobody, so they’re all good.