WashPo: Trump was Caught in 30 Lies During One 2007 Deposition 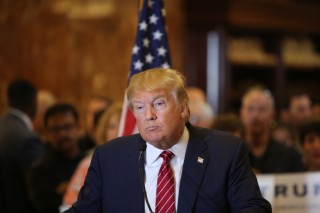 A new Washington Post report delves into a deposition from 2007, where Donald Trump was grilled over various claims he’s made about earnings, his number of employees, and other figures. According to the Post, attorneys caught Trump in 30 lies at the deposition, which was part of a case where Trump sued an author who wrote that The Donald wasn’t worth as much as he claimed he was.

“Have you ever lied in public statements about your properties?” a lawyer asked Trump. The current GOP Presidential candidate replied, “I try and be truthful,” adding, “I’m no different from a politician running for office. You always want to put the best foot forward.” In one part of the deposition, Trump acknowledged that he once intentionally implied to a reporter that he owned a 50 percent stake in a real estate project. He then admitted that in reality, he only owned 30 percent.

Other fabricated figures included how many employees he had, his debts, the membership cost at one of the golf clubs he owns, and earnings.

At times, he defended the lies, insisting that they were somehow true, even if the numbers didn’t reflect it.

Attorney Andrew Ceresney asked Trump how much the New York City education center The Learning Annex paid him for a speaking engagement. “I was paid more than a million dollars,” Trump said. Ceresney asked how much of that was actually in cash. “Approximately $400,000.”

So where did more than half of Trump’s claimed amount come from? As the Post put it, “the intangible value of publicity.” Trump apparently claimed that the value of getting his name and brand out there was worth even more than the speech itself. By that logic, if Trump had spoken for free, he could have claimed he was paid $600,000.

The case came about after a book, “Trump Nation: The Art of Being the Donald,” came out in 2005. It was written by then-New York Times reporter Timothy L. O’Brien. In it, O’Brien reportedly questioned sources who said that Trump was worth between $150 million and $250 million, disputing Trump’s claim that he was worth billions.

The case ended up being dismissed.