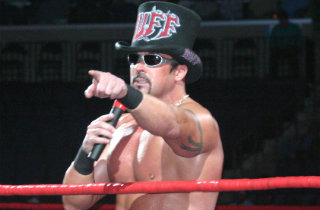 On Wednesday, the latest in a series of lawsuits against World Wrestling Entertainment was filed in federal court in the District of Connecticut. Professional wrestler Marcus Bagwell, better known as Buff Bagwell and now a cast member on Showtime’s “Gigolos” reality series, filed a 22-page complaint alleging that he’s been wronged by WWE not paying royalties. Bagwell says he’s owed royalty payments from his matches being available on the WWE Network streaming video service. The complaint seeks class action status, and the local counsel representing Bagwell, Brenden Leydon, serves the same role in the concussion/misclassification/racketeering lawsuit filed against WWE in July.

This is the second such lawsuit of this nature filed against WWE in recent months. In April, wrestler Rene Goguen (better known as Rene Dupree) filed a similar lawsuit. That one was dropped within days because Goguen had signed anof agreement in 2011 releasing WWE from all claims. Strategically speaking, these suits differ from other wrestlers’ attempts to sue WWE (as well as ESPN) for royalties because past plaintiffs were arguing for claims based on likeness rights and related issues.

The Bagwell lawsuit, however, zeroes in on a short-lived (approximately 1999 to 2004) WWE contract provision that promised royalties for “video cassettes, videodiscs, CD ROM, or other technology, including technology not yet created.” Finding a plaintiff was even trickier than finding someone who signed a contract during those years, as WWE contracts merge into/supersede each other. As a result, under this strategy, anyone who re-signed after 2003 would be bound by a contract that explicitly said they didn’t get royalties from internet streaming fees or subscription video on demand services.

Having said all that, a potential monkey wrench in this case is that Bagwell was in and out of WWE within weeks in 2001 and is seeking royalties for video of his work in WCW, the Turner Broadcasting-owned company that WWE bought in 2001, months before they signed Bagwell.

In an email to LawNewz.com, WWE counsel Jerry McDevitt alluded to this specific issue:

This suit is every bit as meritless as the first one filed by the same lawyers on behalf of Rene Dupree, which was abandoned shortly after it was filed. Bagwell never was promised royalties by either World Championship Wrestling Inc or by WWE for the use of the copyrighted works of World Championship Wrestling, Inc. We will be moving to dismiss the case if it is not voluntarily withdrawn, as it should be.