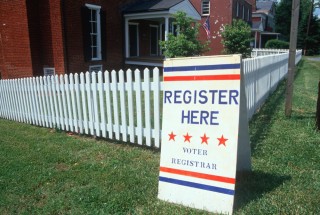 It’s another development in the voter ID fight. On Friday, appellate judges in Washington D.C. have issued a preliminary injunction against the U.S. Election Assistance Commission. The federal agency must temporarily ignore the proof-of-citizenship requirement in the National Mail Voter Registration Form used in Kansas, Alabama, and Georgia. This affects all applications filed since January 29.

This reverses a U.S. District Court ruling that denied the preliminary injunction. From the judgement:

Our dissenting colleague claims that a Constitutional issue “would arise if a court issued a final injunction in this case forbidding the Commission from including the states’ requirements.” But that issue is not presented in this case because the Leagues seek only to enjoin the Commission (or its agents) from giving effect to the January 29, 2016 decisions of Executive Director Newby. Neither this preliminary injunction nor a final judgment would forbid the Commission from including a proof-of-citizenship requirement if it determined that such a requirement was necessary to “effectuate [the States’] citizenship requirement[s].” Arizona v. Inter Tribal Council of Arizona, Inc., 133 S. Ct. 2247, 2260 (2013).

It’s all part of a lawsuit filed by the League of Women Voters of the United States against Brian D. Newby, the Executive Director of the U.S. Election Assistance Commission. Newby okayed demands from Kansas, Alabama, and Georgia to change the federal form to reflect state ID requirements. In Kansas, voters would have to show ID like passports, and birth certificates.

The League of Women Voters applauded the injunction in a statement published Friday. They called the proof-of-citizenship documentation “difficult to obtain” and “illegal.”

“We should be making voting easier, not harder,” they said. “All eligible Americans deserve the opportunity to register and vote without obstacles.”

We’ve contacted the U.S. Election Assistance Commission for comment, and will update when we hear back.

[image via Joseph Sohm and Shutterstock]
–