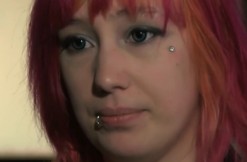 A video game developer says she will end her lawsuit against an ex-boyfriend who allegedly sparked a massive, online harassment campaign against her. Zoe Quinn, maker of the PC game Depression Quest, announced Wednesday she’d end her legal claim against Eron Gjoni, a software developer. In her suit, filed in a Massachusetts civil court, she alleged that he harassed her by making a 2014 blog post with ongoing consequences.

In a statement posted Wednesday, she wrote that the stress of the case was too much for her. She alleged that she’s suffered significant, and multiple threats from strangers because of the suit. For example, she cited a  Reddit threat titled, [and we’re maintaining the formatting here] “if eron goes to jail, I will hunt zoe quinn down and rape her.” She wrote that harassment like this was only becoming more and more frequent.

“The continual escalation only ever increases the chances that someone will make good on something like this,” Quinn, 27, wrote. “Trying to get the law to protect me has only continually put me in harm’s way.”

Let’s explain the backstory for a minute. In August 2014, Gjoni wrote a blog post claiming Quinn might have slept with a video game journalist for a good review of Depression Quest. This prompted the creation of a social media hashtag, “Gamergate.” Ostensibly, this was about creating transparency and eliminating conflicts of interest among game journalists.

But it quickly devolved. Quinn reported that critics hacked into her web accounts, doxed her (posted her personal information online), and issued multiple rape and death threats. Apparently, her friends and family were targeted as well.

To be clear, Gjoni apparently hasn’t been accused of issuing those threats himself. He’s written, yes, in all caps, “I DO NOT STAND BY THE CURRENT ABUSE AND HARASSMENT OF ZOE QUINN OR FRIENDS. STOP DOING THAT. IT IS NOT IN ANYONE’S BEST INTEREST.” Though he’s also been quoted by Boston Magazine as calling his ex a “hypocrite,” a “compulsive liar,” and an “asshole.”

As for Quinn, she referred to Gjoni as “Creep Throat” in her Wednesday post.

More backstory before this article ends because the context needs fleshing out. Gjoni has been accused of prompting the creation of a harassment campaign, but there’s so much to it. #Gamergate is annoying to describe, and stressful to think about. Like any “hashtag movement,” it’s not really centered on specific individuals or organizations. For example, you could easily say that the U.S. government has such-and-such policy, and the Sinoaloa drug cartel was up to such-and-such shadiness. That makes sense. Those establishments feature a structure, where members have specific links and relationships with other members.

But #Gamergate doesn’t really have a structure. It’s more about commentators and random people on the Internet adopting the banner of journalistic principal and what-not. This quickly spiraled into a drive against women in geek culture. Lots of women have reported facing capital-M misogyny with death threats, rape threats, and doxing, causing some female game journalists to leave the industry. However, while much harassment has been alleged, few claims have resulted in legal action.

You can see Quinn talk about #Gamergate in this 2014 interview with the BBC:

Not everyone who supports this hashtag has been accused of making threats, buy hey, anyone can use it. Some mean well, some don’t. Sister-site The Mary Sue features more coverage on this, if you want to read more.

In any case, Quinn’s case against her ex seems to be over, and she wrote that she informed officials about her decision. As of now, there’s been no announcement that the suit has been formally dropped.

[image of Quinn via BBC screengrab]
–