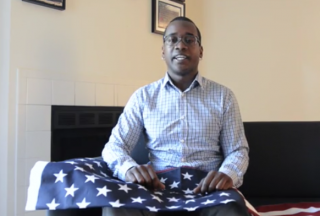 A Marine veteran from Charlotte, who served in both Iraq and Afghanistan, lowered the flag outside his company’s office to half-mast on Memorial Day, and lost his job the next day, the Charlotte Observer reported. Allen Thornwell, 29, was working for Time Warner Cable, a job he got through a placement service for veterans. Thornwell had a six-month contract with the company, and was one month into it at the time.

Thornwell said he got a call the morning of Memorial Day saying he had to work from 2pm to 7pm that day. When he noticed that a flag outside the office was not at half-mast, he decided to lower it, without asking for permission. He was then told by a guard that the company policy is that no one is allowed to touch the flagpole. Just a few minutes later, the flag was back up at full-mast. Thornwell told the Observer that he was angered by this, but that he was not disrespectful. He said that a security guard even told him, “I fought. I understand.”

However, that night Thornwell posted a video of the flag on Facebook, where he can reportedly be heard cursing angrily (it appears to have since been taken down). He marked it “Timewarner” and gave it the title, “So many years wasted. I’m telling you … PEOPLE DON’T GIVE A F***.” The next morning, he got a call from his placement service saying his contract had been terminated and asking what happened.

A manager at the placement company told Thornwell that Time Warner Cable was uncomfortable with his “passion for the flag and (his) political affiliation.” “I don’t know what kind of moral compass you need to fire a veteran on Memorial Day for lowering the flag,” Thornwell told the Observer. Time Warner Cable did not comment on the termination, other than confirming on Friday that Thornwell was no longer with the company.

The U.S. Flag Code says that on Memorial Day, flags are to be flown at half-mast until noon, and then returned to full-mast. Thornwell was aware of this when he lowered the flag at around 2:30 pm.

He told the Observer that he suffers from post-traumatic stress disorder and was dealing with strong emotions that day about the death of his best friend who killed himself two years ago after returning from service, and with feelings about his own service and his perception of a lack of understanding from civilians. He said that people don’t always understand that “[s]ometimes symbols, like the flag, mean a lot.”

“A lot of veterans have a hard time transitioning into the civilian world,” Thornwell told the Observer, saying that the country does not always do the best job in assisting them when they come home. “I think this situation, what happened to me, is a prime example of the lack of protection for veterans.”

Murph Archibald, Thornwell’s attorney and a veteran himself, told the Observer, “He didn’t do anything wrong. He’s a veteran working on Memorial Day who corrected what he thought was a disrespectful flying of the American flag … I would have taken it down myself.”

Thornwell said that he regrets not asking for permission, but said, “I didn’t think of it as the property of Time Warner Cable,” adding, “It’s everybody’s flag.”