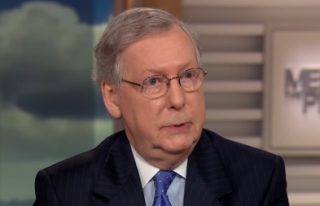 Senate Majority Leader Mitch McConnell appeared on NBC’s Meet the Press on Sunday, and faced questions regarding presumptive GOP Presidential nominee Donald Trump‘s comments about the judge in one of the Trump University cases. Trump had said that Judge Gonzalo Curiel could not be impartial in the case because he’s of Mexican heritage. Chuck Todd asked McConnell if he felt Trump’s statement about Judge Curiel, who was born in Indiana, was racist.

While McConnell wouldn’t use the ‘r-word,’ avoiding it after three consecutive questions, he did say, “I couldn’t disagree more with what he had to say.” He went on, saying, “All of us came here from somewhere else … That’s an important part of what makes America work.”

McConnell also expressed regret over how his party has addressed — or failed to address — Hispanic voters. “I am concerned about the Hispanic vote,” he said, also claiming that “it’s a big mistake for our party to write off Latino Americans.”

Despite his feelings about Trump’s statement and general attitude towards Latinos, saying “I hope he’ll change his direction on that,” McConnell remained hopeful. “He’s a very competitive candidate,” he said, adding, “We’re all behind him now, and I’d like to see him reach out and pull us all together.”