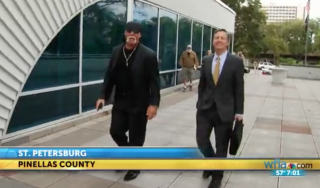 Late Friday afternoon, nearly a thousand pages were unsealed in the Hulk Hogan sex tape case. The document dump comes after the jury started deliberating in the Hogan’s $100 million invasion of privacy trial. Gawker’s attorneys contend that depriving the jury of this crucial information was a major misstep by the judge, and that the “jury deserved to know about during the deliberations.”

LawNewz.com went through pages and pages of documents, and they reveal  that Hulk Hogan was quite concerned the that tapes contained racial comments that he had made.

But, probably, the most interesting is the fact that  Bubba The Love Sponge reportedly told the FBI that Hogan was aware that he was being filmed having sex with Bubba’s wife. That is significant because it chips away at the very basis for Hogan’s lawsuit — which is that Gawker invaded his privacy by posting his sex tape online. If he truly knew about the camera, how could he claim invasion of privacy? The documents were originally sealed by the the Florida judge, an appellate court ordered them released.

Here are the relevant sections as highlighted by CNN’s Tom Kludt:

And then there’s this: Bubba telling the feds that Hogan knew he was being recorded #hulkvsgawkpic.twitter.com/HGWmyJru3W

But, you can see Bubba later changed his tune about whether Hogan knew he was being filmed.

Hogan sued gossip website Gawker  in 2012 after it published parts of a video that showed him having sex with the wife of radio shock jock Bubba the Love Sponge Clem. The video was recorded in 2006. During the trial, Hogan’s attorneys say it was recorded without Hulk’s knowledge. Hogan’s lawsuit seeks $100 million in damages for invasion of privacy. Gawker’s attorney say that since Hogan’s sex life was part of the public discourse, the sex tapes are First Amendment protected. Right now, jurors are deliberating the case. Watch here for any live updates regarding their decision.

Here is a link to all of the documents.