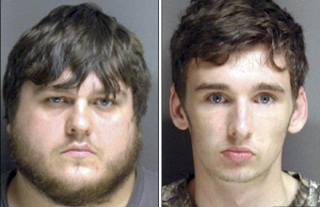 Two men from Iowa who brought weapons with them to the Pokemon World Championship convention in Boston last summer were sentenced on Thursday. James Stumbo and Kevin Norton had both been charged possession of an AR-15 rifle, a shotgun, and ammunition, the Boston Globe reported. Stumbo pleaded guilty to possession of a rifle, Norton pleaded guilty to possessing the shotgun, and both copped to the ammunition. Each of them were sentenced to two years in a correctional facility plus two years of probation.

On August 19, 2015, the day before the two men drove to the convention on August 20, 2015, Stumbo posted a picture of the weapons in his car online, with the caption, “Kevin Norton and I are ready for worlds Boston here we come!!!” According to Assistant District Attorney Brian Brodigan, both of them sent threatening messages to other Pokemon players, including one that said, “My AR-15 says that you lose.”

Robert Le Roy, Norton’s lawyer, said that his client and Stumbo were not aware of the differences between Massachusetts and Iowa gun laws. “They basically always drive around with loaded guns in the trunk in Iowa,” Le Roy said, calling the incident an “error in judgment.”