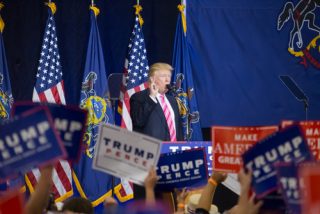 Trump’s presidential campaign staffers and even his unpaid volunteers are required to sign contracts promising to never say anything bad about Trump, his campaign for president, his family, or his companies.  For as long as they shall live.

I call them unconscionable, unconstitutional, and unenforceable in court when they are written as broadly as Trump has written them.

Of course journalists are not bound by these contracts.

Reporters have the right to ask Trump’s campaign workers questions and urge them to talk about the campaign because it is a matter of public concern.  Only when a reporter offers to pay for the campaign worker’s legal costs if Trump sued the worker, would the reporter be potentially liable for interfering with the Trump worker contract.

But how likely is Trump’s campaign leak?

Imagine working for Trump’s campaign.  You might want to tell a reporter about unethical conduct, illegal acts, or just interesting stories from within the campaign.  Maybe you want to talk to government officials as a whistleblower.  Perhaps you might want to talk about whether the Trump campaign has any information about whether the Russians are hacking Clinton emails.  Or you want to write a memoir about your experience.  Or talk to historian Doris Kearns Goodwin or journalist Seymour Hersch.  Or be hired by CNN as a political commentator.   Or write a book for Harper Collins.

But you are stopped cold when you look at your Trump campaign worker contract.  It states that you may not publicly “demean or disparage” Trump or his family members, and may not disclose any information “that Mr. Trump insists remain private or confidential.”  Since Trump gets to decide what is private, that would cover everything.

You read that just a few months ago, Trump filed a $10-million claim against former campaign consultant Samuel D. Nunberg for allegedly violating his confidentiality contract by acting as the source for the May 10, 2016 New York Post article, “Trump Campaign Staffers Get into Public Screaming Match,” about campaign spokesperson Hope Hicks and former campaign manager Corey Lewandowski arguing in the street.  At the time he was sued by Trump, Nunberg had been fired by the campaign and had endorsed then-candidate U.S. Sen. Ted Cruz.

Nunberg is fighting back; arguing he was not the source, and even if he were, the Hicks-Lewandowski argument was hardly “confidential” campaign information because it occurred in a public street.

But, Nunberg’s most powerful argument is that Trump’s legal attack violates the First Amendment and public policy.  “Mr. Nunberg is being harassed by the Trump Campaign for exercising free speech and voicing his opinion on material issues that the public is entitled to know before voting on November 8, 2016,” Nunberg argued in his motion to block Trump from proceeding with his legal claim.  Trump’s $10-million claim “violates public policy to impose a prior restraint on constitutionally protected speech as the Trump Campaign is wrongfully attempting to do in the arbitration proceeding.” Nunberg won a court order temporarily blocking Trump’s claim.

If you are a Trump worker, and you read about that case, you probably decide it is not worth the risk of coming forward and talking to a reporter.

If you do decide to tell your story, it’s going to be half-true because you don’t dare say anything negative about Trump to avoid violating your contract, and simply function as a cheerleader.  Is that what why Corey Lewandowski seems to be 100% pro-Trump even though he is supposed to be an informative political commentator on CNN?  Lewandowski is not saying.

A person running for president of our nation should not be able to use his gag-order contracts to censor information about him or his campaign.  Hillary Clinton reportedly has confidentiality clauses in her campaign worker contracts.  If her secrecy provisions are equally broad, they, too, violate the First Amendment and public policy.

Our democracy survives because we have a free and independent press that vigorous guards its right to report on all kinds of information, secret or otherwise  Trump’s secrecy contracts are choking off key information we need as voters and Americans.

Trump is not the only one one silencing workers with overly restrictive confidentiality agreements.  American corporations are increasingly requiring workers to sign nondisclosure contracts promising not to blow the whistle on fraud or other illegal or questionable behavior – not even to government investigators.

Adding insult to injury, Trump and corporations are requiring that any litigation over these secrecy clauses be decided in an arbitration proceeding, which is held in secret and decided by retired judges who are paid by the hour, and are not required to follow the law and not subject to full appellate review like public judges are.
Trump and other employers have the legal right to require their employees not to divulge truly confidential and proprietary business information, such voter data that has been sorted and organized by the campaign, or in the case of a business, trade secrets like the formula for Coke.

But what if a campaign worker is sexually harassed at work by a boss or co-worker? What if the campaign worker has information about illegal acts, such as the hacking of emails? Or witnessed a spat by campaign leaders on a public street? Are Trump’s workers forbidden from calling a lawyer, law enforcement, or reporter about those things? No.  The law should not allow any employer, Trump or otherwise, to impose broad gag orders on information like this, which is neither a trade secret nor proprietary business information, and is a matter of public interest or already public.

Congress and state legislatures should ban overly broad confidentiality and non-disparagement contracts.  Judges and arbitrators should rule that these agreements violate public policy and the First Amendment, and are unconscionable and unenforceable.

Susan E. Seager is a First Amendment attorney who teaches media law at the University of Southern California