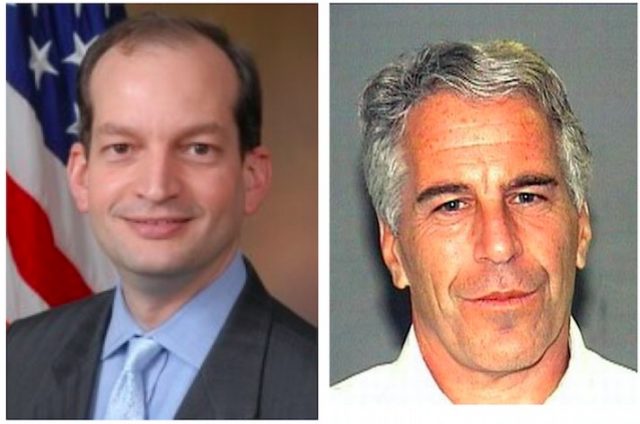 When I first heard the name Alexander Acosta, Trump’s new pick for Labor Secretary, I knew it sounded eerily familiar. And then it dawned on me. He was the U.S. Attorney in charge of the Southern District of Florida from 2006 through 2009, and oversaw a sweetheart deal for Jeffrey Epstein. Yes, that Jeffrey Epstein, the convicted billionaire pedophile, who allegedly victimized dozens of underage girls.  Here’s what you might not know about the case, and it raises some serious questions about how Acosta handled himself under intense pressure from a well-connected billionaire.

In 2007, federal prosecutors, under Acosta’s leadership, quietly entered into a secret non-prosecution agreement with the billionaire which ensured that Epstein and his ‘co-conspirators’ would not be prosecuted federally in exchange for Epstein’s guilty plea to state charges. Basically, Epstein got a slap on the wrist and served 13 months in a Florida prison and home detention for solicitation and procurement of minors for prostitution .

As a result of this “sweetheart” deal, the federal government is now facing litigation with several alleged sexual abuse victims of billionaire Jeffrey Epstein who sued the government back in 2008. Their claims center around how federal prosecutors handled the investigation into Epstein’s alleged victimization of underage girls. The case reveals how federal prosecutors came to this deal with the billionaire, reportedly ignoring the rights of the alleged victims in the process.  Recent filings in the case also raise legitimate questions about what else prosecutors would have discovered if the federal investigation had not come to an abrupt end with the promise of no prosecution by the feds.

Attorneys for the victims in this case contend their clients’ rights were violated when the U.S. Attorney’s office in the Southern District of Florida failed to notify them in a timely matter of this non-prosecution agreement — a deal these alleged victims (called Jane Doe’s in the case to protect their identities) would have objected to vigorously.

“The Government and Epstein conspired to conceal the NPA (non-prosecution agreement) from the victims to prevent them from joining any objection, and to avoid the firestorm of controversy that would have arisen if it had become known that the Government was immunizing a politically-connected billionaire and all of his conspiracies from the prosecutions of hundreds of federal crimes against minor girls,” the plaintiff’s attorneys wrote in a court filing.

As a matter of law, the civil case centers around The Crime Victims’ Rights Act passed in 2004 which requires investigators to notify victims of proceedings, and afford them “the right to be treated with fairness and with respect for the victim’s dignity and privacy.” However, maybe more importantly, the case brings to light questions about what else would have been discovered if Acosta had forgone the non-prosecution agreement and let his prosecutors do their job and investigate the billionaire’s alleged illicit activity. Would anyone else have been implicated? What more could investigators have found? Why did this rich guy get such a good deal?

I have spent hours and hours reading through the evidence and filings in this civil case. In my opinion, the young women make it clear from a series of documents obtained through discovery that the U.S. Attorney’s Office in Southern Florida violated the very spirit of the federal law meant to protect victims. Not only do prosecutors negotiate a carefully worded non-prosecution agreement with Epstein’s attorneys, they apparently don’t notify dozens of his alleged victims until after the deal has been signed. When the feds did send out notifications in 2008, documents reveal the FBI made it appear as if the investigation was still ongoing, even though they knew full well that a deal had been reached with Epstein to end the investigation.  If that’s not bad enough, attorneys for the alleged victims also presented evidence that federal prosecutors worked with Epstein’s attorneys to prevent the public disclosure of the non-prosecution agreement.

In my view, the U.S. Attorney’s office, with Acosta at the helm, would never have taken such action in a criminal case if they hadn’t been heavily influenced by Epstein’s slew of heavy-hitter attorneys which include Alan Dershowitz, Kenneth Starr, Roy Black, and Jay Lefkowitz. That’s not to say that Epstein should have been charged  or would have been found guilty of federal crimes. I am simply saying that I have little doubt that Epstein would have been treated differently if he was just your average middle-aged male pervert.  A letter written by Acosta in March 2011 (after he left the U.S Attorney’s office) perfectly reveals the intense pressure put on prosecutors by Epstein’s defense team in the case.  Acosta wrote:

“…What followed was a year-long assault on the prosecution and the prosecutors. I use the word assault intentionally, as the defense in this case was more aggressive than any which I, or the prosecutors in my office, and previously encountered..

The defense strategy was not limited to legal issues. Defense counsel investigated individual prosecutors and their families, looking for personal peccadilloes that may provide a basis for disqualification.”

Acosta also acknowledged that evidence has now come to light that may have changed the outcome of the case. “Had these additional statements and evidence been known, the outcome may have been different. But they were not known to us at the time,” Acosta wrote in the letter. In February, the plaintiff’s attorneys, in a motion for summary judgment, asked a judge to find that federal investigators and prosecutors violated the law.   “Despite the responsibilities to the victims, the Government chose instead to side with the man who had victimized them,” they wrote.

At last check, the civil case against the federal government was still ongoing. During a 2002 interview with New York Magazine, Trump said he knew Jeff for 15 years and called him a “terrific guy.”

“He loves beautiful woman as much as I do, and many of them are on the younger side,” Trump reportedly said. However, Trump later denied that the two were close.  While Acosta was not named in the civil lawsuit, you can bet his actions and decision not to prosecute Epstein will be a turning point in his upcoming confirmation hearing.

A version of this article first appeared on LawNewz in May, but this version has been update to highlight Acosta’s role in the Epstein case.