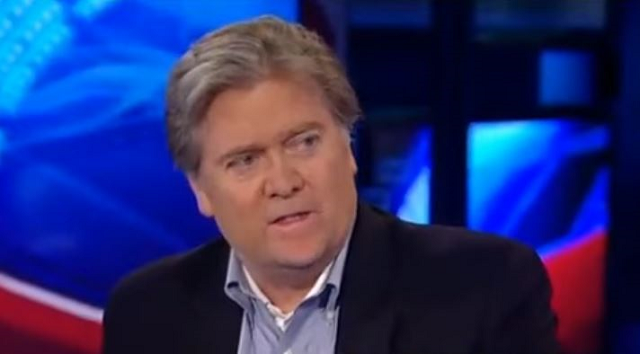 This morning, President Donald Trump announced that he will launch an investigation into voter fraud in November’s election, targeting, among others, people who were registered to vote in multiple states. This is pretty ironic, considering that Trump’s own chief strategist and campaign CEO, Steve Bannon, was reportedly registered to vote in both New York and Florida, and Trump’s pick for Secretary of the Treasury, Steve Mnuchin, is said to be registered in both New York and California.

A column in The Sarasota Herald Tribune says Bannon was registered in Manhattan, and that a New York Board of Elections representative confirms that Bannon voted under the New York address via absentee ballot. Meanwhile, the column says, Bannon also had an active Florida registration from when he registered in Sarasota County, Florida in August, according to the Sarasota County Supervisor of Elections office. This supports a similar report by The Guardian about Bannon’s multiple registrations.

CNN’s KFile reported on Wednesday that Mnuchin has active registrations in New York and California, according to information they got through open records requests. Those records show that Mnuchin last voted from his New York address in 2008, and from California in the 2016 Republican primary. Registration records in California were not updated in time to show whether Mnuchin voted there in November’s election.

But the story here isn’t that Trump’s own people are guilty of voter fraud, it’s the exact opposite. While Bannon and Mnuchin appear to have been registered in two states, there is no evidence that either of them voted more than once. So basically, while the President is railing against voter fraud, naming people with multiple registrations among the guilty parties, his own adviser cabinet pick appear to be living proof that Trump’s reasoning is faulty. Multiple registrations can be the result of innocent and harmless error. Just because someone is registered to vote at multiple locations, that doesn’t mean they voted twice.

Multiple registrations can happen innocently enough if someone moves to a new state and registers under their new address. If their previous county doesn’t get word right away, or if a person working in that county’s elections office just doesn’t bother removing the old registration, then there will be multiple active registrations. So it makes sense that President Trump would claim that many Americans have multiple registrations. What doesn’t make sense is the assumption that people in this situation are guilty of fraud. Outdated public records are not the same as millions of people voting more than once.

One has to wonder how the President doesn’t realize this, when all he’d have to do is talk to his own people. Of course, one also has to wonder, given that Trump won the election, why even cares about this in the first place.

Note: This article has been updated to reflect Steve Mnuchin’s multiple voter registrations.