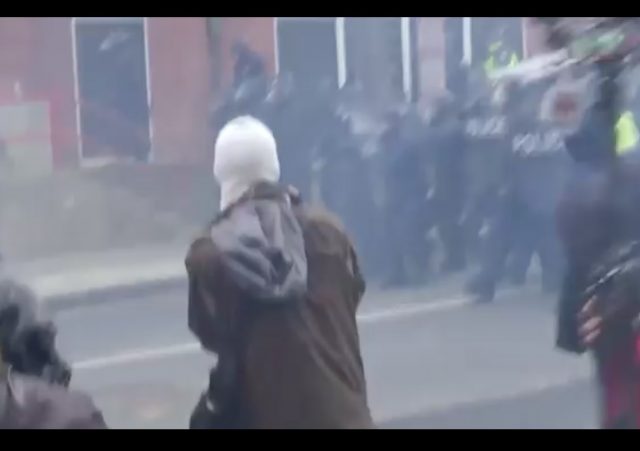 Four additional journalists have reportedly been charged with felonies during arrests they say occurred while covering the Trump inauguration protests.  That brings the total to six members of the media who face felony charges with punishments of up to 10-years in prison, according to the Guardian newspaper.

According to the report,  the four journalists arrested include a documentary film producer, a photojournalist, a livestream reporter and a freelancer.  The four were reportedly charged under D.C.’s most serious law against rioting, though they say they were merely caught up in the crowd of police and protesters.

This brings the total number of journalists arrested to six, the news outlet reports.   Reports on Monday stated Evan Engel of Vocativ and Alex Rubinstein of RT America were also arrested on felony charges at the same event as the other four.

All six are currently out of jail after being arraigned on Saturday and additional hearings are set for February and March.

A review of documents obtained by the newspaper reportedly shows at least five of the journalists’ arrest reports include identical allegations.  Specifically, that “numerous crimes were occurring in police presence and “[t]he crowd was observed enticing a riot by organizing, promoting, encouraging and participating in acts of violence in furtherance of the riot.”

LawNewz reached out to the Committee to Protect Journalists for comment on the arrests received the following statement form Carlos Lauría, senior Americas program coordinator:

“These charges are clearly inappropriate, and we are concerned that they could send a chilling message to journalists covering future protests.  We call on authorities in Washington to drop these charges immediately.”

The US Attorney’s Office for Washington D.C., which is prosecuting the cases, declined to comment on the specific cases, but spokesman William Miller said:

On January 21 the Metropolitan Police Department presented the United States Attorney’s Office with evidence as it related to the 230 individuals who were arrested on Friday, January 20th. Based on the facts and circumstances, we determined that probable cause existed to support the filing of felony rioting charges. The Office determined that this charge – which applies if any person suffers serious bodily injury of if property damage exceeds $5,000 – was appropriate. We are continuing to work with the Metropolitan Police Department to review evidence related to the arrests on Jan. 20. As in all of our cases, we are always willing to consider additional information that people bring forward. Because these matters remain pending in the Superior Court of the District of Columbia.…

A preliminary hearing for Engel and Rubinstein has been scheduled for mid-February. The other four journalists have hearing dates set for later in match.

In all over 200 people were arrested during the protests.