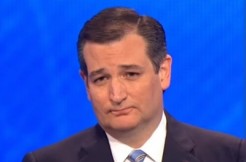 Here we go, everybody: Trump supporters say Texas Senator Ted Cruz is ineligible to be president because he was born in Canada, according to the lawsuit they filed in Alabama on February 3. Well, not all of them want Donald Trump to be president. A few are undecided, their attorney Thomas Drake told The Hill, but they all agree Cruz shouldn’t be in the Oval Office.

The suit rests on Article II, Section I on the Constitution stating that “No person except a natural born citizen, or a citizen of the United States, at the time of the adoption of this Constitution, shall be eligible to the office of the President.”

You can read the suit here:

“Natural born.”  Cruz, was born in Calgary, Alberta, Canada, so on the face of it, it seems like he’s out of the running. Yes, that’s right, “on the face of it.” There’s more to it.

We already talked about Cruz’s eligibility before. Actually, he could still qualify to be president. In our previous article, LawNewz.com’s Rachel Stockman looked into this, and found a pretty convincing legal argument could be made that yes, he still counts as a “natural born” citizen. See, since his mother was an American citizen (his dad was Cuban-born), he would still qualify under most legal scholars’ interpretations.  The “natural born” clause could favor Cruz if read in terms of what the Founding Fathers thought.

Though a similar lawsuit was already filed in Texas, Cruz is obviously still running for the presidency, seeking the Republican Party nomination. He won the Iowa Caucus.