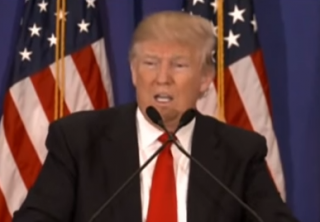 Donald Trump posted a statement on Tuesday addressing his comments about Judge Gonazlo Curiel, who is presiding over one of the lawsuits against Trump University. Trump had said that Curiel was biased against him because he’s ‘Mexican’ (he’s from Indiana, but has Mexican heritage). He has since come under fire from politicians on both sides of the aisle, as well as the media. In his statement, he acknowledged the backlash, but didn’t exactly take it back completely.

I do not feel that one’s heritage makes them incapable of being impartial, but, based on the rulings that I have received in the Trump University civil case, I feel justified in questioning whether I am receiving a fair trial.

He has cited his plans to build a wall on the Mexican border as an example of why Curiel would be against him. Here, he continues to blame his own platform for why a judge wouldn’t be able to do his job:

However, given my unique circumstances as nominee of the Republican Party and the core issues of my campaign that focus on illegal immigration, jobs and unfair trade, I have concerns as to my ability to receive a fair trial.

Trump then dragged President Barack Obama into the mix:

Due to what I believe are unfair and mistaken rulings in this case and the Judge’s reported associations with certain professional organizations, questions were raised regarding the Obama appointed Judge’s impartiality. It is a fair question. I hope it is not the case.

For the record, Obama nominated Curiel to the federal bench in 2011, well before Trump started his campaign, let alone expressed his desires regarding Mexico.