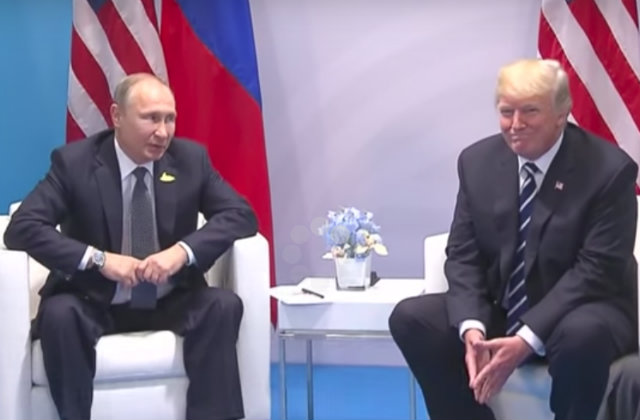 What is it like when the president spits on your work? Just ask an intelligence officer. Donald Trump proved once again that he will take Moscow’s word over that of United States officials. On Sunday, he went on a tweet storm, saying he and Russian President Vladimir Putin discussed making a, ha, “cyber security unit.” POTUS seemed to accept his counterpart’s denial that the Kremlin interfered in the 2016 presidential election.

…have it. Fake News said 17 intel agencies when actually 4 (had to apologize). Why did Obama do NOTHING when he had info before election?

“Fake News said 17 intel agencies when actually 4 (had to apologize),” he wrote. That’s an apparent reference to a New York Times article from June 25. It incorrectly stated that all 17 U.S. intelligence agencies claimed Putin ordered an ‘influence campaign’ aimed at the 2016 election. No, it was just four, so the Times had to issue a correction. Actually, the Office of the Director of National Intelligence released an unclassified summary on January 6, supported by intel from The Central Intelligence Agency, The Federal Bureau of Investigation, and The National Security Agency.

Yeah, only the biggest intel agencies in the United States. No big deal.

It sort of makes sense that Trump complains about the Times’ mistake. The claims of Russian interference hurts his administration. A special prosecutor and several congressional committees are investigating alleged collusion between his campaign and Moscow. He has called the claim an attempt by Democrats to undermine him.

The collusion allegation is still under investigation, but the fact remains that four major intel agencies said Putin ordered the interference.  (And last October, Department Of Homeland Security and the Office of the Director of National Intelligence on Election Security issued a joint statement saying Moscow was behind hacking efforts against “election-related systems.”)

You’d think this would be a big deal for a president who rants about unproven voter fraud allegations, but now he wants to make a “cyber security unit” with the county who tried to undermine the election.

To be clear, optics are overrated. A politician’s public statements aren’t as important as what they do behind the scenes. It is less important than the power behind statutes, executive orders, sanctions, etc (you know, stuff more boring than tweets). But yeah, taking a softer hand with Russia than, say, NATO allies…that’s weird. As the son of Cuban immigrants, I find this surreal. Disturbing.

And maybe that’s the point. Rep. Will Hurd (R-Texas) had it right when he appeared on the March 19 episode of This Week:

It’s going to go down in the history of Mother Russia as the greatest covert action campaign not because President Trump won—there was no manipulation of the vote tally machines. It’s going to go down as the greatest covert action because it created a wedge, whether real and perceived, between the White House, Intelligence community, and the American public.