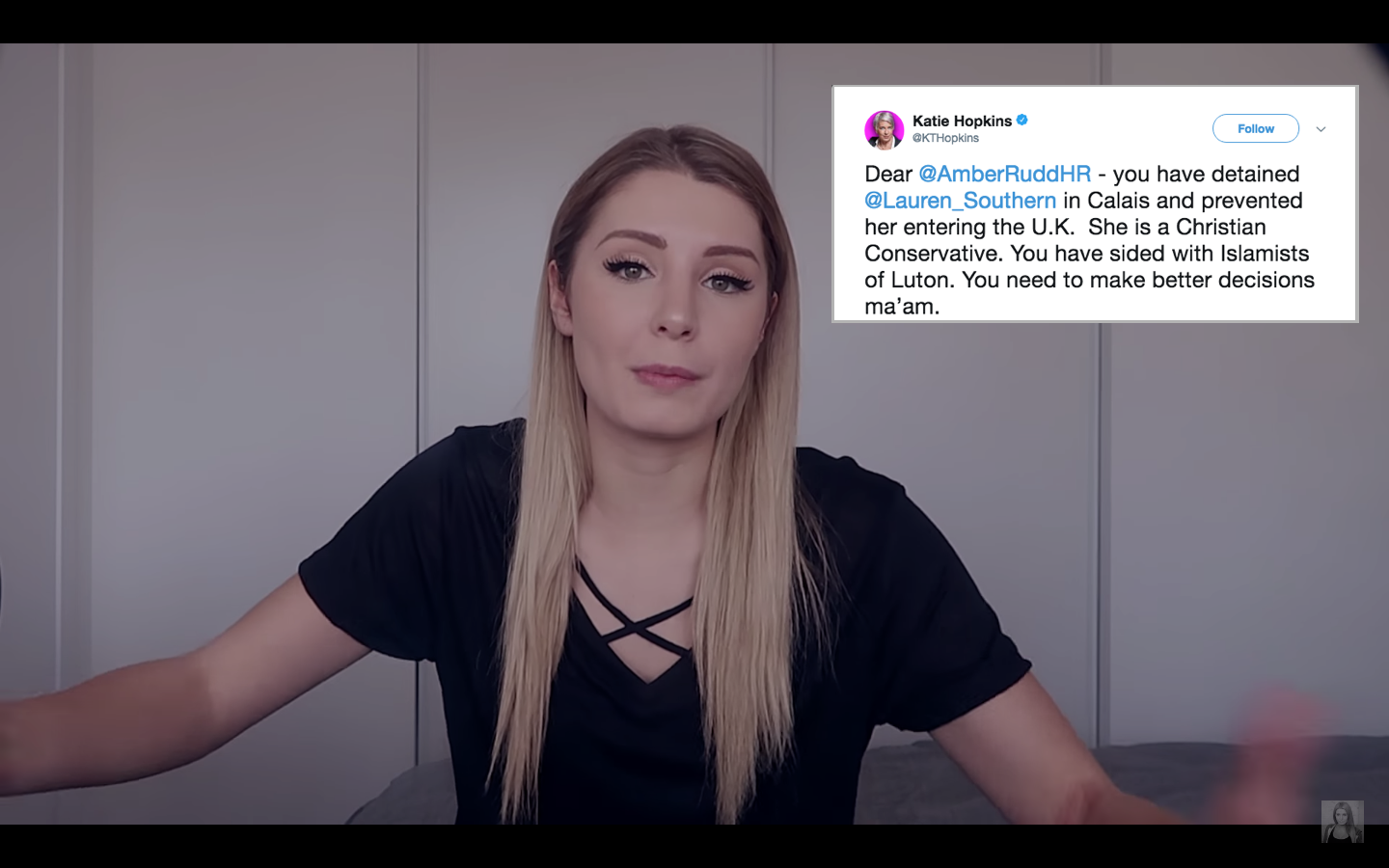 Various Trump fans and assorted members of the alt-right got extremely upset on Twitter over the weekend, after a prominent alt-right and anti-immigrant activist was detained while trying to enter the United Kingdom before being deported.

YouTube personality Lauren Southern was attempting to enter the UK by bus on March 11, when border police questioned and detained her.

Southern is famously opposed to immigration and frequently posts videos about her views. Southern previously made a name for herself by shooting a flare gun at a search and rescue ship in the Mediterranean while it was looking for distressed refugees.

Sympathetic media accounts claimed Southern’s phone was seized–but only after she was able to alert her friends and alt-right media to her predicament.

According to the alt-right media, Southern was planning to meet with two other alt-right personalities during her visit: Martin Sellner and Brittany Pettibone.

In similar fashion, Sellner and Pettibone were detained and denied entry to the United Kingdom three days prior to Southern’s attempt to re-enter the country, after controversially passing out Islamophobic leaflets in eastern England.

.@Lauren_Southern, on her way to the U.K. by bus, has been singled out by the border police—they took her passport and she’s currently being questioned. I’ll keep you updated on the situation as soon as I learn more.

So I tried calling @Lauren_Southern and it goes to voicemail. Travelling to the UK is no longer safe it seems.

Ian Miles Cheong, a popular pro-Trump Reddit user also voiced his disdain for the UK’s actions and his support for Southern:

Lauren Southern has been detained by the British police. Any chance we could get a #freelaurensouthern hashtag going?

According to tweets sent by Southern while she was still under administrative detention and then after being released border police initially investigated her on the authority of the UK’s Schedule 7.

Schedule 7 is a controversial and putatively “anti-terrorism” provision of UK law which gives border police the broad authority to stop, question, search, and detain individuals attempting to enter or leave the country.

A denial of entry letter outlined the reasoning for Southern’s detention and deportation:

You have asked for leave to enter the United Kingdom as a visitor for up to five days. However, by your own admission, on the 24th February 2018 you were involved in the distribution of racist material in Luton. I believe that your actions whilst in the United Kingdom present a threat to the fundamental interest of society and to the public policy of the United Kingdom.

The denial letter continues, “You have not sought entry under any other provisions under the immigration rules. I therefore refuse you leave to enter the United Kingdom. I propose to request that the competent French Authorities remove you from the Control Zone.”

Southern says that after she was officially tossed out of the Control Zone, the gates were locked and French authorities said “Au revoir.”

The “Control Zone” referenced is a small, short-term detention site within the French port city of Calais jointly-administered by French and UK authorities.

Calais is, notably, an interesting locus for the Lauren Southern controversy to have unfolded. The city is home to a large refugee population. This refugee population has been steadily demonized by conservative, alt-right, white nationalist, and anti-immigrant communities for years.

Law&Crime reached out to Southern for comment but no response was forthcoming at the time of publication.