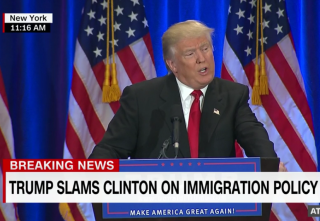 During Donald Trump‘s televised tirade against his presumptive opponent in the Presidential election, Hillary Clinton, the Republican accused Clinton of planning to create “totally open borders.” The fact of the matter is, not only is this not true, but Trump’s supposed evidence deals with a separate issue.

In a diatribe against Clinton’s immigration policies, Trump brought up her proposals for granting what he referred to as “amnesty” for people currently in the country illegally. He said that her plan to “end virtually all immigration enforcement” would “create totally open borders.”

I’m sorry, what? Does he not realize that those are two different things? Say what you will about Clinton’s immigration policies, but granting clemency to people already in the country is not the same as opening the border for people to cross over in the future. Even if Clinton does wish to end all immigration enforcement against people already living in the U.S., which also isn’t true, that has nothing to do with border security moving forward.

Clinton has actually spoken about the strength of the border. During a debate in March, she acknowledged her past support of enhancing border security, including a physical barrier between the U.S. and Mexico. She used the strength of the border as reason for shifting attention to how to properly deal with people already in the country, and granting them paths to citizenship. Even if Trump disagrees with that approach, it’s not at all the same as opening the border.

In other parts of his speech, Trump made some valid criticisms against Clinton, but he hit a wall on this one.