Paul Manafort Was Once Sued by Fmr. Ukrainian Prime Minister for ‘Scheming’ and ‘Money Laundering’ 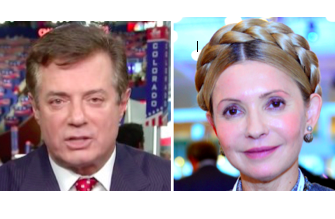 On the heels of the DNC email leaks, Hillary Clinton‘s campaign manager, Robby Mook, pointed the finger squarely at the Russians and said that the emails were leaked to help elect Donald Trump.The FBI has confirmed that they are also investigating the suspected Russian cyber attack. As a result, there has been much talk about Trump’s campaign and ties to Russia. Many Democrats are specifically bringing up the fact that Trump’s campaign manager, Paul Manafort, recently consulted for pro-Russian politicians in the Ukraine, including helping former Ukrainian Prime Minister Viktor Yanukovych (a Vladimir Putin ally).

LawNewz.com did some digging into those alleged ties, and discovered that for several years Manafort was also caught up in a lawsuit filed by former Ukranian Prime Minister Yulia Tymoshenko. She accused Manafort and others of funneling money into the United States to help pay Ukrainian prosecutors and supporters of Viktor Yanukovych who in 2010 narrowly defeated Tymoshenko to become Ukraine’s president.  After four years of litigation, the lawsuit was dismissed in 2015 by a Manhattan federal judge. Attorneys denied Manafort had any involvement.

The lawsuit centers around what Tymoshenko called politically motivated prosecutions against her. Tymoshenko, who served as the first female Prime Minister from 2007 to 2010, faced criminal charges for alleged involvement with a gas import contract signed with Russia. She was ultimately released from prison in 2014 after a revision of the Ukranian criminal code that decriminalized the actions for which she was convicted. At around the same time, Yanukovych was ousted from power. She has long held that the prosecutions against her were unjust, corrupt and were motivated purely by politics.

In 2011, Tymoshenko filed a lawsuit in the U.S. District Court in the Southern District of New York against Ukranian industrialist Dmytro Firtash, and others for allegedly running a U.S. based racketeering enterprise which stood to benefit financially from her prosecution. One of the named defendants in the lawsuit is none of other than Paul Manafort.

As part of the lawsuit, Tymoshenko alleged that Firtash, who runs a natural gas company called RoUkrEnrgo, “skimmed” money from a natural gas contract between Russia and Ukraine. She accused him (and the other defendants including Manafort) of laundering the money through bogus New York real estate transactions.

The complaint, specifically alleged, that Manafort “played a key role in the defendants’ conspiracy and racketeering enterprise.” The complaint says that money was laundered through various New York based bank accounts and that the business activities were primarily conducted at Manafort’s offices.

The complaint alleges, that “a large portion of these money laundered funds, particularly the New York bank accounts of the various defendant companies and their co-conspirators, was then funneled back to Ukraine to provide the financing” for the persecution and deprivation of human rights” of Tymoshenko. The complaint says that since Manafort was key advisor to President Yanukovych, he “knew exactly how Firstash” was able to skim billions of dollars from the natural gas deals between Russia and Ukraine.

In response to the complaint, attorneys representing the defendants said that Manafort and others in the U.S.  had absolutely no connection to the events complained of in Ukraine. They moved to get the case dismissed several times, but the former Prime Minister continued to file amended complaints.

In December 2015, the case was dismissed for good by a federal judge. The judge ruled that the the former Prime Minister could not re-file the case. LawNewz.com tried contacting Mr. Manafort about the case, but have not heard back.

Interestingly, in an unrelated 2014 case, Firtash was indicted in an alleged conspiracy to bribe government officials in India to mine titanium minerals.