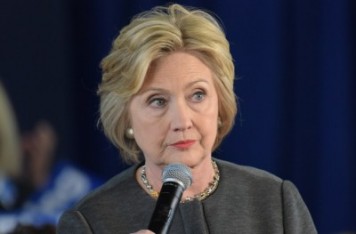 A new report published over the weekend has revealed the identities of the government officials who exchanged material classified top-secret with Hillary Clinton during her tenure as Secretary of State. In what has become a common occurrence over the past year, this report contradicts Clinton’s ever changing public claims about her use of the private email server.

Vice News late on Friday reported they had obtained a document from the State Department through a Freedom of Information Act (FOIA) request showing Clinton discussed top-secret information with three of her top aides. The aides with whom Clinton discussed the top-secret material were identified as deputy chief of staff Jake Sullivan, chief of staff Cheryl Mills and Deputy Secretary of State William Burns. This is reportedly the first time the State Department has revealed the identities of the individuals who exchanged emails with Clinton that contained top-secret information.

The State Department provided the new information in the form of a Vaughn Index, which the report states is a document filed in FOIA lawsuits to “justify the withholding of information under a FOIA exemption.” A typical Vaughn Index is reportedly required to contain at least some general information about the subject matter of the withheld material. However, the Vaughn Index provided by the State Department includes no such information because the information found on Clinton is considered to be too sensitive to even mention the general topic of the discussions publicly.  The document only provides the authors and recipients of the classified emails and the year they were sent.

For example, one 2011 email exchange labeled “Email Chain #1” is described as follows:

The description of a separate email chain labeled “Email Chain #5” from 2012 states:

Steven Aftergood, the director of the Project on Government Secrecy at the Federation of American Scientists, told Vice News that the State Department’s Vaughn Index document was wholly inadequate.

“State did not ‘identify each document’ in such a way as to clearly distinguish among the various documents, and it certainly did not explain the damage that would result from disclosure of any or all of the documents,” Aftergood told the news outlet. “So it doesn’t seem to meet the legal standard for a Vaughn index.”

Furthermore, this new information appears to raise questions about the justifications made by some Clinton defenders for not prosecuting her.  Some have argued that prosecuting Clinton would’ve required the Department of Justice to prosecute potentially hundreds of other government officials that were included on classified email chains.  In fact, Clinton herself even relied on this defense in an effort to lessen the sting of FBI Director James Comey’s devastating conclusion that she lacked the sophistication to understand the classification system.

“Now, I worked with over 300 people during e-mail exchanges — predominantly, in the State Department; a few in other parts of the government — people with long experience and expertise in handling classified material — and I had no reason to second guess their judgments about the material that they were exchanging, and that they would forward or send to me,” Clinton told Wolf Blitzer in an interview on CNN.

However, the descriptions of the top-secret email exchanges appear to show that the discussion of the most sensitive classified information was actually limited to Clinton and three of her top aides — not hundreds of other government officials.  For example, in “Email Chain #5” the limited description makes it all but impossible to discern whether the classified information was included in the originating email from an unidentified “State Department official.”  One interpretation could be that the material only became classified at the top-secret level due to the subsequent discussion by Clinton or Sullivan.  The State Department could clear this up quickly by filing a more detailed and proper Vaughn Index, but based on how this entire email investigation had unfolded that seems to be an unlikely result.