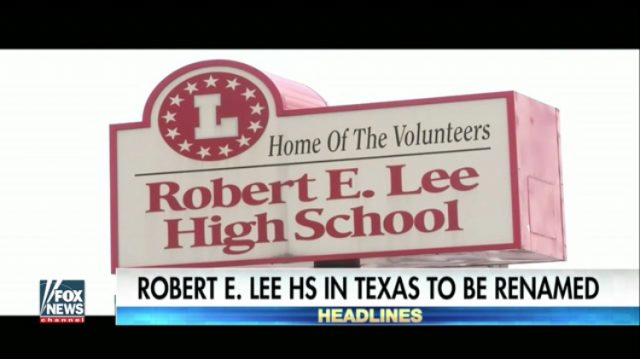 A school in Texas is the latest to root out public commemoration of Lost Cause Confederate figures and history.

The former “Robert E. Lee High School” in San Antonio is no more–after trustees with the North East Independent School District voted unanimously to change the name on Tuesday evening.

Some of those votes, however, weren’t based on actual opposition to the name, but apparently came out of a desire to end the ongoing debate and move on. Trustee Brigitte Perkins, while holding back tears, said:

“My conscience on this vote has not changed. I still feel very strongly about not changing the name. It makes the battles of long ago mean something. This has caused so much distraction and disruption for our administration over a long period of time, and I am tired of that distraction. This has to stop.”

Board president Shannon Grona bristled about how the national conversation over Confederate commemoration is impacting events in San Antonio, but voted to change the name in order to “take the target off our backs.” Grona voted against changing the name in 2015.

In fact, the proposal to re-name the school was initiated by an outgoing trustee who originally opposed the measure as well. Sandi Wolff, who presented the plan, said, “This has not been a singular decision of this board; rather, the result of many conversations.”

Most of the school’s students who gathered to hear the decision were in favor of the name change.

Kenny Strawn, president of the school’s Young Democrats club, said, “The change is to protect the students as well as harbor a greater learning environment.”

Not everyone was happy about the change.

Recent graduate Benjamin White, who had started a petition in opposition to the name change, said, “I took pride in where I went and the name of my campus.”

There is currently no plan in place to choose the new name.