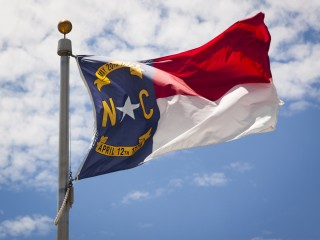 Last year, stemming from North Carolina legalizing same-sex marriage, state legislators passed a law allowing magistrates and registers of deeds to opt out of performing same-sex marriage ceremonies if they had a “sincerely held religious objection,” overriding the governor’s veto (marriage equality became the law of the nation two weeks later). At the time, the Campaign for Southern Equality summed up the feelings of those who opposed the bill by pointing out in a statement that “Senate Bill 2 is unconstitutional, and will undoubtedly be challenged in court.” You can guess what happened next, and the resulting lawsuit, Ansley et al v. Warren (PDF), has its first major hearing on Monday.

U.S. District Judge Max Coburn will hear the state’s motion to dismiss, which was filed as a 35 page written brief back on May 5th, with the plaintiffs responding on May 31st. The motion asks for the case to be dismissed due to lack of jurisdiction as well as standing, in part because “[p]laintiffs here rely exclusively upon their state taxpayer status to assert standing before this Court.” The state also asserts that the plaintiffs have failed to state a claim, being that “Senate Bill 2 does not single out ‘[g]ay or lesbian citizens like Plaintiffs,’ but rather simply allows magistrates to recuse themselves from performing all marriages.” This could be key: to opt-out, the magistrate or register of deeds must opt-out of all marriages for six months, not just those that they object to.

In their response, the plaintiffs point out that “[a]ll of the magistrates in McDowell County have recused themselves from performing marriages rather than support and uphold the Fourteenth Amendment right to marry.” This means that they have to pay to bring in a magistrate from Rutherford Country to perform a marriage. “As a result, every gay and lesbian citizen in McDowell County knows that every magistrate in their county has officially rejected their right to full citizenship and equality, and that their tax dollars have been used to further that disavowal of their rights.”

According to the Associated Press, various Republican legislators and magistrates want to be added to the case as defendants. Apparently, they don’t trust Attorney General Roy Cooper, a Democrat, the defend the law.