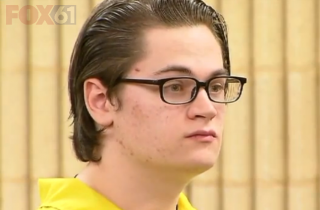 Christopher Plaskon, who killed classmate Maren Sanchez in 2014 on the day of their high school’s junior prom, was sentenced to 25 years in prison on Monday, ABC7 reported. Plaskon pleaded guilty to murder in March.

Prosecutors say that he stabbed Sanchez after she declined to go to the prom with him, but Plaskon’s attorney, Ed Gavin, said it was because his client is mentally ill, according to Fox61.”It really has nothing to do with the prom. It was a kid who was decompensating and psychotic,” Gavin said.

Plaskon was 16 at the time, and is 19 now. The time he has already served counts towards his sentence, and CTPost.com reports that he will be eligible for parole after 13 years,