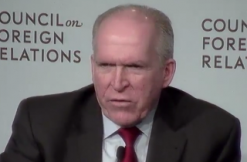 That 16-year-old accused of hacking into the CIA director’s account was arrested, American and British authorities say. This teen, known online as “Cracka,” was taken into custody in the East Midlands region of England on Tuesday.

The AOL account of John Brennan, head of the CIA, was hacked in October. Side-stepping the obvious question as to why he still uses AOL, his e-mail included lots of sensitive information. According to the hacker, who contacted The New York Post, all sorts of things. For example, a 47-page application for top-secret security clearance, Social Security numbers of major U.S. intelligence officials, and a letter about “harsh interrogation techniques.”

“I was certainly outraged by it,” Director John Brennan said after the hacking. “I certainly was concerned about what people might try to do with that information.” He denied any implication of wrongdoing.

“Cracka” has also been accused of messing with the Comcast account info of Jeh Johnson, the Secretary of the Department of Homeland Security.The kid is also part of a hacking group, CWA: “Crackas With Attitude.” One of his colleagues, who goes by the alias “Cubed,” told The Daily Dot that the teen has been released on unconditional bail.