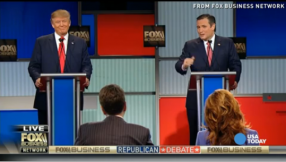 In a wild game of he said he said, Ted Cruz and Donald Trump sparred last night from the top two spots of Fox Business’ Republican Primary Debate stage in South Carolina.

Mr. Trump ramped up his birther allegations against Ted Cruz and the Senator’s Canadian birth. Cruz responded in kind with an allegation of his own: Trump may not be not qualified to be president by virtue of his Scottish mother. A valiant political effort by Senator Cruz but based on absolutely no valid legal questions.

By this logic, neither Trump, Rubio or the now and always obsolete Bobby Jindal would be eligible for the presidency. “I’m not going to use your mother’s birth against you…” Cruz said, to which Trump hastily interjected, “because it wouldn’t work.”

Ted Cruz does not have to “take legal advice from Donald Trump,” but he should heed his Harvard Law education and refrain from strawman arguments that have no legitimacy. The distinction between a child born internationally and a child born domestically is significant. Whichever way one wants to interpret “natural born,” and there are many, there is nothing in the Constitution’s legislative history or the text that requires both parents to be born in the United States. In fact, Article Two, clause 5 of the Constitution states, “No Person except a natural born Citizen…shall be eligible to the Office of President.”

There is no explicit or implicit language regarding that person’s parents, whether it be one or both, and their place of birth. Senator Cruz’s claims are without merit, intellectually dishonest, and flat-out inane.

Has anyone actually made this argument before? Not that I can find. Even if we take birtherism to the extreme (oh yes we have been there before), Cruz is grasping at straws. No plausible reading of the phrase “natural born” merits Cruz’s accusation.

The U.S. Constitution’s eligibility requirement mandates that the president be a “natural born” citizen. As Laurence Tribe, a constitutional law professor at Harvard who was happened to teach President Obama,  Senator Cruz, and Chief Justice John Roberts, said:  there are legitimate questions regarding the interpretation of and intention behind the words “natural-born.” That debate does not include Donald Trump.