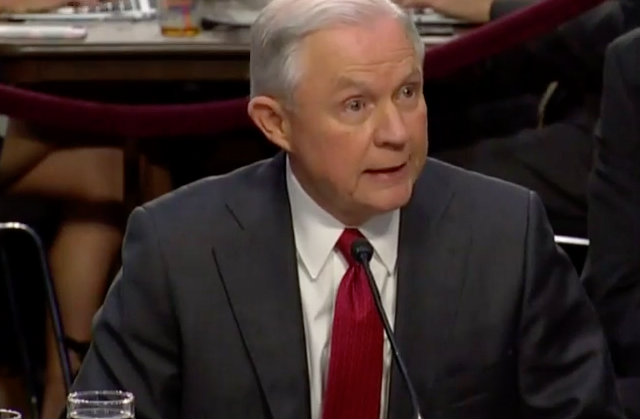 In a speech today in Norfolk, Virginia, Attorney General Jeff Sessions vowed to eliminate “political bias or favoritism” from the ranks of the Department of Justice and simultaneously appeared to threaten the jobs of anyone who fell short of his vision of perfection. He said the move was necessary “in order to maintain the public’s trust in their government.”

Sessions said he needed to return the DOJ to “the constitutional role of enforcing the law as it is written, not as some particular group thinks it should have been written.”

Some people like that concept.  Some people don’t.  But the Constitution says that Congress writes the laws and we enforce them, not the other way around.

How does that work?

It means absolutely eliminating political bias or favoritism – in either direction – from our investigations and prosecutions.  That sort of thinking is the antithesis of what the Department stands for, and I won’t tolerate it.

We expect—no, we demand—the highest level of integrity, ethics, and professionalism from every person in this Department.  Everyone is expected to advance the mission of the Department honorably in service to the American people.  If anyone falls short of these high standards, we will not hesitate to take appropriate action — and we will do so in accordance with the rules and procedures of the Department.

Sessions did not explain what that “appropriate action” would entail.

Though Sessions didn’t mention it directly, the comments appear to be a response to criticism from a number of members of congress, including Sen. Chuck Grassley (R-Iowa), who is chair of the Senate Judiciary Committee. Grassley bashed the FBI an the DOJ over recent investigations into Hillary Clinton and her associates and President Donald Trump and his associates by alleging that bias has led to a softball investigation toward Clinton and a harsh examination of Trump. Other Senators have echoed this as text messages between attorney Lisa Page and FBI Agent Peter Strzok have continued to be made public. Some of those messages have reportedly included negative comments about Trump, and what Republicans have viewed as evidence of anti-Trump and pro-Democrat agendas within the DOJ.

The comments were made at the tail end of a broader speech on “national security and immigration priorities.”