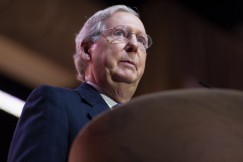 The Kentucky Republican, who spoke out against President Obama’s article II responsibility to appoint a Supreme Court Justice just moments after the death of Justice Antonin Scalia, made the remarks as he spoke from the Senate floor.

Republican members of the Senate Judiciary Committee—which is in charge of conducting federal judge hearings—unanimously decided to oppose any confirmation hearing.

This is his moment. He has every right to nominate someone. Even if doing so will inevitably plunge our nation into another bitter and avoidable struggle, that is his right. Even if he never expects that nominee to actually be confirmed but rather to wield as an electoral cudgel, that is his right.