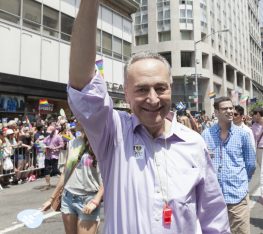 The election of Donald Trump on Tuesday seems to be bringing some good news to one group of traditional Democratic Party supporters — Big Labor.

According to the Washington Post, New York Senator Chuck Schumer told the AFL-CIO executive council on Thursday that the Trans-Pacific Partnership (TPP) trade deal will not be ratified by Congress in the lame duck session.

TPP was the centerpiece of President Obama’s so-called “pivot” to Asia.  The deal was also supported by some top Republicans, including House Speaker Paul Ryan.

President-elect Trump and Bernie Sanders both campaigned strongly against TPP this election season, arguing the multinational trade deal would harm American workers.  However, it was a particularly thorny issue for Hillary Clinton.  She ultimately came out against the deal, but during her tenure as Secretary of State she had referred to it as the “gold standard” of trade deals.  There was some concern that the deal would be revived under a Clinton presidency.

Sen. Schumer’s remarks were reportedly separately echoed by Senate Majority Leader Mitch McConnell, who said the decision to go forward on any new trade deals would have to wait for President Trump’s approval.