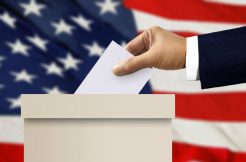 Congratulations to Gary Ernst! This city treasurer for Oceanside, California just won a decisive victory in his re-election campaign, earning 17,659 votes. Also: sincere condolences to his loved ones after he passed away in September from diabetes complications.

It’s not like Ernst’s campaign wrapped up just because he died. There wasn’t enough time to remove his name from the ballot, and at least one supporter really, really didn’t want opponent Nadine Scott to win.

”Ms. Scott does not get to win by default because her opponent passed away,” Councilmember Jerry Kern said, according to a Tuesday report from the Oside News. “This is the process that must be followed according to state law. If Ms. Scott is trying to say anything different, it demonstrates her lack of knowledge regarding the law and once again demonstrates her lack of qualification. She is not qualified to be Treasurer and it is in the city’s best interest for the voters to select Mr. Ernst in order for the City Council to select a qualified Treasurer to replace him.”

The city council faces two choices right now: Either appoint Ernst’s replacement or hold a special election. Scott told KNSD-TV that she wants to be appointed so her 15,000-plus voters will get their choice.

We spoke with Councilmember Kern about what’s likely to happen. He said the council is likely to appoint since the city clerk estimated that a special election would cost over a half-million dollars. They’re working with a time table, though. Candidates would be scheduled for interviews on January 11, and if no appointment is made that day, then an appointment would be made on the 18th.

“The dates for interviews and appointment can be changed in the discretion of the Council; however, the process should be concluded no later than the February 1, 2017 meeting,” states a memo from City Manager Michelle Skaggs Lawrence and City Attorney John P. Mullen. A special election would be scheduled for June 6, 2017.

In any case, this replacement process can’t begin in earnest until after the election results are certified on December 7. Kern said that based on his experience of previous campaigns, he expects there will be about a five or six different candidates.

Update – November 10, 3:21 p.m.: Updated with statement from Kern, and information from a city memo.

[image via razihusin and Shutterstock]
–