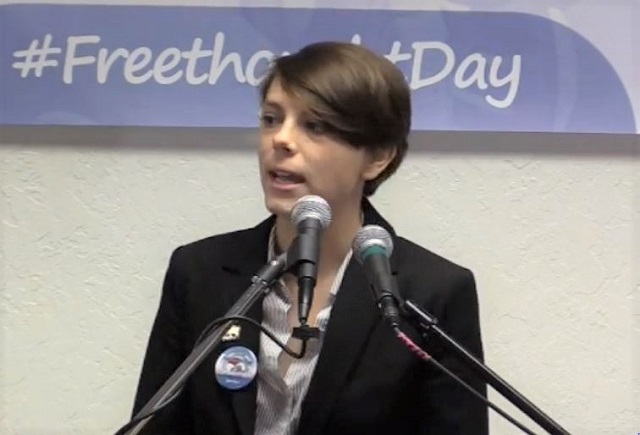 Cidney Fisk was an outspoken student at Colorado’s Delta County High School. School faculty didn’t appreciate her opposition to their alleged religious agenda, and punished her by lowering her grades, a new lawsuit claims. Fisk had a 4.1 GPA, was student body treasurer, captain of the speech and debate team, a reporter for the school magazine, and performed community service, yet she says school faculty  hurt her chances at getting into colleges because of the religious conflict she had with them.

She alleges that during her time at the public school, teachers expressed religious views in class, the school district allowed outside individuals to hand out bibles at a middle school during school hours, and that at a school board meeting, one board member said that “transgender students should be castrated,” as per her “Christian” belief.

In 2014, Fisk expressed opposition to a proposed local measure to grant “personhood” to fetuses by speaking out and wearing a costume, along with other students. During a reprimand in front of classmates, a teacher allegedly told Fisk, “God gave babies life and abortion is murder.”

In her 2015-16 senior year, Fisk says she “came out” as an atheist. She spoke and wrote critically of the school’s practices, including what was allegedly an overtly Christian, abstinence-only sex education course. In the spring of 2016, she gave an interview with a local newspaper about the school district, including the bibles being handed out at the middle school. Her complaint says that people issued death threats against her online, and when she notified the school, they did nothing.

Not only that, Fisk says that the teacher for Student Government lowered her grade from a 98 to a 70, and after the local article came out, and F. When Fisk discussed this change with faculty, she was allegedly told it was due to her “questioning of authority,” specifically of the religious variety, and that she should “shut up” if she wants her grades to go back up. Certain grades were raised after Fisk’s parents complained, the lawsuit says.

The complaint says that despite those issues, Fisk’s grades qualified her for the National Honor Society, yet her applications were always denied. She also claims that she was denied scholarships because of her exercise of her right to free speech. In the fall of her senior year, a representative for one scholarship took interest in her and said she would flag Fisk’s application for special attention. Nevertheless, Fisk did not get the scholarship, allegedly because the application required a recommendation, and school faculty wouldn’t submit one.

When Fisk applied to colleges, she alleges that faculty members neglected to submit her applications, which required faculty recommendation, until days before the deadline, and only after her parents complained. Faculty members then allegedly gave negative recommendations, and Fisk failed to get into two of her choices.

The following summer, she claims she suffered from anxiety attacks that sent her to the hospital, and for which she needed medication and psychological counseling.

The lawsuit states claims that the school district and individual faculty members violated Fisk’s First Amendment rights, as well as the Equal Protection clause of the Fourteenth Amendment, and the Colorado State Constitution.

LawNewz.com reached out to the school district for comment and will update upon receiving response.