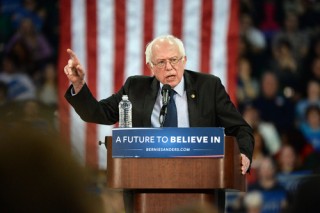 Back in December, Bernie Sanders filed a $75,000 federal lawsuit against the Democratic National Committee for blocking his campaign’s data access as a response to a Sanders aide improperly accessing Hillary Clinton’s information. The aide was fired and soon after Sanders filed the suit, the DNC restored data access to his campaign. However, Sanders kept the case alive, officially serving the DNC with the suit on Thursday, The Hill reported.

A court filing said that the Sanders campaign and the DNC have continued to work to “resolve the pending litigation,” and a source told The Hill that the matter should be “resolved amicably.” But the court said that if Sanders didn’t serve the DNC with the suit by Thursday, the case would be dismissed.

The source said Sanders is keeping the case alive to keep the door open for litigation as both sides await the results of an independent audit. “This filing is very procedural. We went through with it because the report is not yet complete.” So while it seems likely that the matter will be settled out of court, Sanders is keeping his options open, just in case.