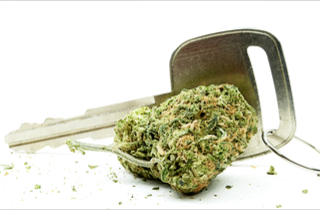 When police pull over suspected drunk drivers who then pass roadside blood alcohol tests, they often run into a problem: While an eventual blood or urine test will inevitably show what the driver was on, it won’t definitively show if he or she was high at the time of the arrest the way that a breath test does with alcohol. According to a report from KTXL-TV in Sacramento, that’s about to change, at least for marijuana, thanks to the work of chemists working on a pot equivalent to the “Breathalyzer” used to measure alcohol intoxication.

“We had to develop some new chemistry that can actually be done. It was not obvious when we started that we could tag this,” said Matt Francis, a chemistry professor at UC Berkeley whose team has been working on a “pot breathalyzer” for the last 18 months. He explained to KTXL how tetrahydrocannabinol (THC), the chemical in marijuana that gets you high, is an especially difficult substance to accurately test for, sitting around in the bloodstream for “sometimes days, sometimes even a month.” As a result, “you cannot use those methods very well to determine if someone has recently ingested marijuana or smoked marijuana. You can’t tell how long it’s been.” Francis adds that his new test, however, can recognize use from two hours earlier.

For that reason, Mike Lynn, the CEO of Hound Labs, who brought the “pot Breathalyzer” challenge to Francis, says he’s gotten support from the pro-cannibis community. “We have tremendous interest from not only law enforcement, employers, who are struggling with this problem, but also the cannabis industry who knows you can’t be driving stoned. Everybody really accepts that.” If there’s a more immediate, accurate test for THC in the blood that can definitively show that someone just got high, it exonerates as many, if not more people than it incriminates.