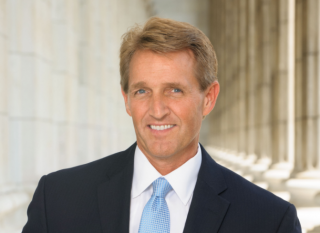 Arizona Senator Jeff Flake spoke about the Mexican border during a radio interview on Sunday, and he is not a fan of Donald Trump‘s plan for a wall separating the U.S. from its southern neighbor, The Hill reported. During a conversation on John Catsimitidis‘ program, Flake said that despite concerns over the federal government’s current handling of the border, a wall is not a practical solution.

“To think that we’d have a wall like Donald Trump is talking about across our 225-mile border with Mexico from California to Texas isn’t very feasible, or advisable,” Flake told Catsimitidis, who ran for Mayor of New York City as a Republican in 2013.

Still, Flake did say that there are problems with the border, including concerns of terrorists and drug trafficking. While he doesn’t think Trump’s wall is the answer, he does feel that the feds need to do more, saying that Arizona “bear[s] the brunt of the federal government’s failure to have a secure border.”