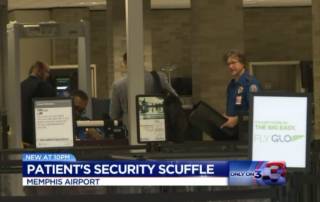 The family of a disabled 19-year-old woman is suing the Transportation Security Administration, after TSA agents allegedly assaulted her, WREG reported. Shirley Cohen and her daughter Hannah were on their way home to Chattanooga, Tennessee from Memphis on Thursday, when Hannah set off a metal detector, allegedly setting off a terrible chain of events.

Hannah, who had just received treatment for a brain tumor, set off the detector, prompting TSA officials to perform a more thorough search. “They wanted to do further scanning, she was reluctant, she didn’t understand what they were about to do,” Shirley Cohen told WREG. She said Hannah is partially deaf, paralyzed, and blind in one eye, and was confused by what was going on. She said she tried to tell the agents about her daughter’s condition, but police kept her away. Hannah tried to get away from the TSA agents, “but in the next instant, one of them had her down on the ground and hit her head on the floor,” her mother said. “There was blood everywhere.”

Security officials claimed that Hannah struck an officer during the struggle, the Commercial Appeal newspaper reported, and police then arrested Hannah, booked her, and placed her in jail. Hannah remained in custody overnight, before a judge dismissed the case the next day and refunded the Cohens’ court fees, according to the New York Daily News.

Now the Cohens are suing the TSA, the Memphis-Shelby County Airport Authority, and airport police. According to the Commercial Appeal, their lawsuit is seeking a “reasonable sum not exceeding $100,000 and costs,” for medical expenses, physical and emotional injury, pain, suffering, and embarrassment.

TSA representative Sari Koshetz said in a statement that passengers can call a TSA Cares hotline to “to learn more about the screening process for their particular needs or medical situation.” The Cohens had been making the same trip for 17 years without incident.