UPDATE: Prosecutors Who Dropped Lewandowski Charge Say There was No Promise of Apology to Fields 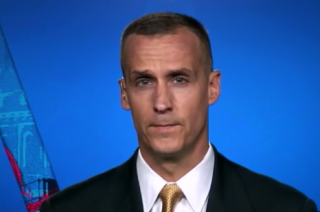 Palm Beach County State Attorney Dave Aronberg announced on Thursday that his office will not pursue the criminal case against Donald Trump’s campaign manager, Corey Lewandowski. Lewandowski was charged with battery for allegedly grabbing the arm of Michelle Fields, then a reporter for Breitbart.com, at a Trump event.

Aronberg said that while the Jupiter Police had charged Lewandowski, his office won’t move forward with the case. He said that while he agrees that the police had probable cause to make an arrest, his office has a higher standard when deciding whether or not to prosecute.

“There is no reasonable doubt that Mr. Lewandwoski pulled Ms. Fields back,” Aronberg said, but added that Lewandowski has a “reasonable hypothesis of innocence,” saying that he appeared to be assisting secret service in clearing a path for Trump, which is not uncommon.

Fields had filed a police report three days after the alleged battery, and Lewandowski quickly denied ever meeting her. Then, video surfaced of him grabbing Fields’s arm as she was trying to question Trump, but it also showed Fields getting very close to the GOP front-runner. Trump himself even tweeted a picture of Fields touching him. These images showed that while Lewandowski might have committed the action described in the allegations, he may have had a defense. It is possible that he was trying to protect Trump by creating space between him and a reporter who was too close for comfort, and didn’t mean to actually grab Fields. Or, if he did act intentionally, it could arguably have been in defense of Trump. After the video went public, a defense attorney who spoke to LawNewz.com actually predicted that the case would be dismissed.

Fields said prior to the press conference that she would consider suing Lewandowski for defamation if the criminal case against him was dropped. She resigned from Breitbart after the incident, when the site published a piece that questioned her side of the story. Lewandowski is still Trump’s campaign manager, although reports indicate that his power behind the scenes has waned in the past few months.

Update 4/14/16 2:34pm: State Attorney Dave Aronberg stated at a press conference that there was no agreement between his office and Fields for Lewandowski to apologize to her in exchange for dropping the charges against him. Aronberg said that Fields was disappointed that the case was dropped and that she wanted the prosecution to go forward. Aronberg added that Lewandowski and his attorneys were working on a draft of a short apology earlier this week. A representative from the State Attorney’s office addressed the photos that Fields posted online depicting bruises on her arm. She said that the images the police first viewed did not show bruising, and that any photos they saw where Fields had bruises were taken later.

Aronberg also acknowledged that Trump himself called the prosecutor’s office and gave his version of the events, saying that Fields touched him at the time. He said that Trump did not threaten to press charges against her.