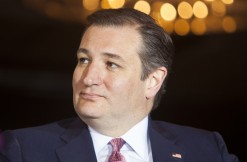 “Men should not be going to the bathroom with little girls,” he said at a Thursday taping of a MSNBC town hall meeting in Buffalo, New York. He said states could pass this and similar laws because “that is a perfectly reasonable determination for the people to make.”

Senator Cruz trails Donald Trump in the race for the Republican presidential nomination, with 545 delegates to Trump’s 743.