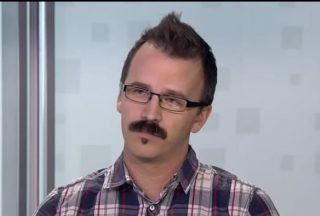 Depending on who you ask,  George Ciccariello-Maher is either a radical, self-hating member of the alt-left, or a master troll. Either way, the Drexel University professor has drawn some strong reactions to his holiday Twitter messages on Sunday.

The post that started it all, which has since been deleted, said, “All I Want for Christmas is White Genocide.” You can imagine where things went from there.

Much of the responses aren’t fit for print, but here are some of the kinder messages the professor received and retweeted.

Say this about any other race on Christmas and there’d be an uproar. Fun fact, if we had communism that could actually happen. https://t.co/Tz1mcFtkA9

Ciccariello-Maher, who has a pinned tweet saying, “Sorry, I’m not ‘alt-left,’ just an actual communist,” kept it going for a while, subtly acknowledging his troll job.

To clarify: when the whites were massacred during the Haitian Revolution, that was a good thing indeed.

One Twitter user was in on the joke, appreciating the professor’s particular brand of commentary, and Ciccariello-Maher appreciated the endorsement.

Jake the Snake gets me https://t.co/ZSuqbls85Z

@ciccmaher your account is hilarious hahaha, the ultimate firm of satire, pretending to be a dirty commy to get people riled up hahahaha

Finally, Ciccariello-Maher clarified his meaning, implying that he was teasing white supremacists who supposedly worry about a white genocide actually occurring.

“White genocide” is a mythical figment of the “alt-right” (a.k.a. white supremacist) imagination.

Still, not everyone has picked up on the gag, which raises the question of whether the controversy spurred by a joke like this is worth it for the limited audience who appreciates it. Of course, looking at Ciccariello-Maher’s Twitter page, he’d probably say that’s the whole point.