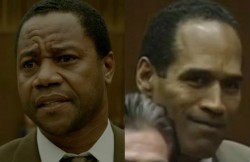 At least one person isn’t happy The People v. OJ Simpson won an Emmy for Outstanding Limited Series. A journalism professor at American University said the show misrepresented the facts: especially the importance of DNA evidence in the case.

Campbell linked to an article he published in April, where he shredded the mini-series’ finale. He said that in real life, the OJ Simpson trial was the first time that the U.S. public accepted the credibility of DNA evidence, but the show botched its depiction.

“The trial undeniably was a turning point in the embrace of DNA evidence,” he wrote. “But about that, the FX audience wasn’t told much at all.”

Campbell said that the show failed to depict how the defense dismantled the prosecution: law enforcement had “mishandled or overlooked” blood found at the crime scene, and also improperly stored samples in a police van without air-conditioning. Also, a reference sample of Simpson’s blood was spilled at the lab where it was tested.

This isn’t the first time The People v. OJ Simpson has been accused of misrepresenting the case. Simpson had allegedly threatened suicide in Khloe Kardashian’s bedroom (her father Robert was one of Simpson’s defense lawyers). But in the show, this incident happened in the room of her more famous sister, Kim.

Simpson, a retired NFL running back, was arrested in the murder of his wife Nicole Brown Simpson and friend Ron Goldman in June, 1994. A Los Angeles jury acquitted him on October 3, 1995, wrapping up a high-profile, controversial case, which is still being debated to this day.