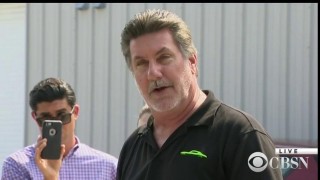 Gun activists came out in defense of the Florida gun shop owner who sold the two weapons that Omar Mateen used in a deadly terrorist attack that killed 49 people at an Orlando night club. Ed Henson, a retired NYPD officer, seemed very well versed in Florida laws surrounding guns and other weapons. Henson says he ‘vaguely’ remembered Mateen going into the shop. He also says he followed all laws and that “I’m not going to be made into a villain.”

Many people including gun rights activists, who watched the press conference which aired live, commented on how well the gun shop owner handled the barrage of critical questions lodged at him by the media.

The owner of the Gun Shop where the #Orlando shooter bought his guns was well spoken as he trashed MSM misinformation.

@CBSNews gun shop owner did nothing wrong. He has the freedom to sell. He doesn’t predict the future wen u buy a gun. Defend freedom 2 buy!

Shop owner could only follow the laws that allowed that fool to buy a gun so easily. I don’t fault him. https://t.co/BDfGgQKdkY

It is unclear how long the support will stay in favor of the gun shop owner. The NY Daily News just published a scathing report detailing some of his rather controversial social media posts. The newspaper reports Henson posted to Facebook an image reading “In the name of freedom: F–k Islam, F–k Allah. F–k Muhammad. F–k the Koran. F–k people who support terrorism.” He also wrote next to a picture of Obama, “He should be handcuffed, removed from Office and charged with Treason and then publicly executed!”