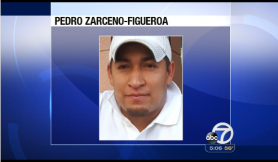 The wheels of a controversial San Francisco law may spin out of control following a possible breach of local sanctuary-city laws in The Golden Gate City. San Francisco police officers handcuffed a car-theft victim, ran his name for warrants and proceeded to hand him straight to federal immigration authorities, or Immigration Customs and Enforcement (ICE), waiting to whisk the man away, records show.

“It is the policy of the San Francisco Police Department to foster trust and cooperation with all people of the city and to encourage them to communicate with SFPD officers without fear of inquiry regarding their immigration status,” a police spokesman, Sgt. Michael Andraychak said. “We are aware of concerns this incident has raised with some members of our community.”

In November, Figueroa-Zarceno had reported his car stolen to police and was alerted it was found just a few days later. However, when the Mission District resident showed up to the police station, he was promptly handcuffed and taken into custody. Sanctuary-city laws function much like good-samaritan laws or drug overdose immunity laws. In effect, as illegal immigration immunity laws, they encourage crime victims, like Figueroa-Zarceno, to report criminal activities authorities without fear of retaliative deportation.

“I was handcuffed because they told me there were questions they needed to ask me, but there were no questions asked — I was simply handcuffed for about 15 minutes,” Figueroa-Zarceno said Friday. He continued, “I was happy that they told me they were going to release me, but once I got out of the Police Department, there was ICE outside.”

The incident is part of an on-going dialogue concerning the interaction of local authorities with federal authorities, specifically as the interactions relate to sanctuary-city laws. Sanctuary-city laws are undoubtedly controversial. Tensions flared in San Francisco last year when a Mexican national, Juan Francisco Lopez-Sanchez, shot Kathryn Steinle to death on San Francisco’s Pier 14. Lopez-Sanchez, a previously non-violent convicted felon with five deportations, was facing his sixth deportation when he was freed from a San Francisco jail under sanctuary city laws, feeding the fire of anti-sanctuary-city activists.

San Francisco is one of a few cities in the United States that has policies designed not to prosecute illegal, or undocumented immigrants. Sanctuary cities do not typically allow municipal funds or resources to “assist in the enforcement of federal immigration law,” or to allow local police to inquire into an individual’s immigration status.

Zarceno-Figueroa’s immigration case is being reviewed by the courts to determine whether he has sufficient legal basis to remain in the U.S. Zarceno-Figueroa immigrated to America to escape violence in El Salvador and his filed asylum papers in the U.S. according to his attorney Zachary Nightingale.